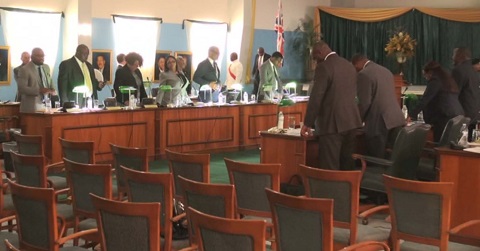 Providenciales, TCI, September 23, 2016 – Today, the House of Assembly convenes for country business and although there are a number of key legislative items undone, the Premier, Hon Dr Rufus Ewing has the prerogative to dissolve parliament today and call for a General Election.  The rumor of this being a possibility is widely circulated and on Wednesday, media asked Opposition Leader, Hon Sharlene Robinson her thoughts.  “I maintain that there are important bits of legislation and supplementary that was just approved for the elections office, and neglections expenditure, nonetheless that can come from contingency funding, if he chooses to dissolve the house, but also the important issue of the ballot, and the redesigning of the ballot to make voting simpler for the people.  So we expect that any well thinking Premier would want to consider that.”

If the Premier were to dissolve and call elections, voters would have at least 35 days before the actual vote.  Robinson was speaking to a number of national issues on Wednesday, and confirmed that she too has heard that some teachers are giving the Ministry of Education some push back on the recently announced new curriculum.  Magnetic Media learned that the Kindergarten to Grade two teachers, selected to help in the change say the curriculum was given to them too late and too suddenly.

In a press conference during the first week of school, it was revealed by Ministry of Education that 20 teachers of the six schools in the pilot program got advanced training.  The new curriculum is described as  ‘fun’, taking the focus off of teachers and shifting it to more tailored learning within each classroom, it will admittedly take more time, dramatically change how children learn and even involves greater parent support at home due to the research required to be done by children.
Hon Robinson said, like the announcement by the Premier to get rid of the CFO through a motion in the House of Assembly, the Minister of Education is running a political stunt.
“I believe that this is just a failed attempt on the part of the minister to have something to campaign that there have been a change in the curriculum, and the curriculum has been ignored for well over a decade.”

Related Items:20 teachers from six schools got advanced training in pilot program, if house is dissolved voters have 35 days before actual vote, it is possible that the premier can resolve the house and call for general election, some teachers giving push back on new school curriculum