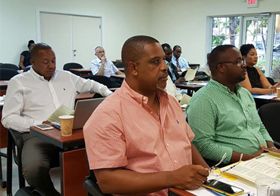 Providenciales, TCI, August 22, 2016 – The Elections Office and the Integrity Commission teamed up this past week to have several briefings with potential candidates – those running independently and those running on a political party ticket.

The meetings featured the Elections Supervisor, Dudley Lewis and Integrity Commission Director, Eugene Otuonye.  With an unprecedented General Election on the horizon for the Turks and Caicos, with possibly as many as two dozen individuals running to fill the five House of Assembly, At Large seats – not only will the ballot paper have to be amended, but there is acknowledgement that the 2011 Constitution never factored in having such vigorous interest for elected office by citizens.

Much of the session focused on financial reporting and accountability; stringent rules were introduced in the 2012 run-off.  The requirement is daily, weekly and monthly reporting on funds acquired and spent.  Every dollar will have to be declared and there is a cap on what can be spent; $30,000 for constituency seats and $100,000 for at large.

There were about 20 people in the all island meeting, held in the conference room of Blue Haven resort and it was described to Magnetic Media as informative by at least two attendees.

While there was some contention expressed by former Premier Michael Misick, who has made it no secret that he believes the Integrity Commission has too much power, the Integrity Commission is constitutionally the boss.  Not only will the Commission ultimately determine who is considered fit for office, after the General Elections, but the I.C. sets salaries and other guidelines including the code of conduct for parliamentarians.