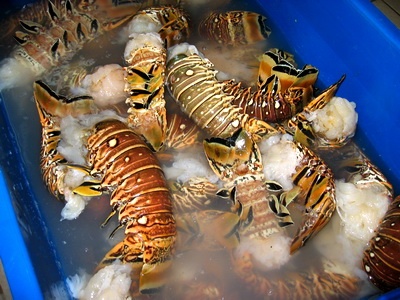 Providenciales, TCI, August 18, 2016 – When lobster season opened on Monday over 40,000 pounds of the coral dwelling crustacean were caught.  The spiny lobster opening day was not as big as last year, but with 80% of the boats in Provo and South Caicos reporting – it was a big day and scores turned out to watch as the fishing boats rolled in.
Magnetic Media was informed that the lobster fisherman were returning to Provo Seafood in Five Cays from as early as 3pm on August 15 and that from Provo, there were nearly 70 vessels on the seas chasing the spiny lobster.
Lobster season remains open until March 2017.  At least one season opening event is announced as planned at Froggies on Da Beach in September.