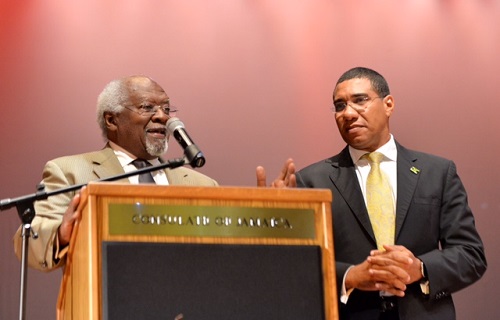 New York, U.S, September, 26, 2016 – Prime Minister, the Most Hon. Andrew Holness, is encouraging Jamaicans in the Diaspora to sign an online petition calling for the exoneration of National Hero, the Right Excellent Marcus Mosiah Garvey, by the United States (US) Government.  The petition seeks to have US President Barak Obama pardon Garvey on the basis of “wrongful conviction” for mail fraud charges brought against him in 1923.

It requires 100,000 signatures by September 28 in order to get a response from the White House.  The petition can be accessed at: www.justice4garvey.org.  The Prime Minister made the call while addressing a town hall meeting at the Jamaica Performing Arts Centre in Jamaica, Queens, New York, on September 22.  Mr. Holness said the exoneration of Mr. Garvey  “is very important for our country and our National Hero.”   He contended that Mr. Garvey stood up for the “depressed and downtrodden” and, in the process, made his mark globally.

“The time has come when he should be exonerated…and that time is now,” Mr. Holness declared.  The Prime Minister was joined on the platform by the National Hero’s son, Dr. Julius Garvey, who told the audience that it was appropriate that his father be pardoned as he did not commit a crime.

“He was criminalized because he was standing up for black people all over the world. We have to let the President know that the people of the Caribbean, the people of Jamaica, Africans all over the world are behind Marcus Garvey because he is an international hero for African people,” he said.  Dr. Garvey expressed the hope that the petition would be successful in achieving its goal.

The town hall meeting was one of several engagements for Mr. Holness’ week-long visit to New York where he attended the 71st meeting of the United Nations General Assembly (UNGA).