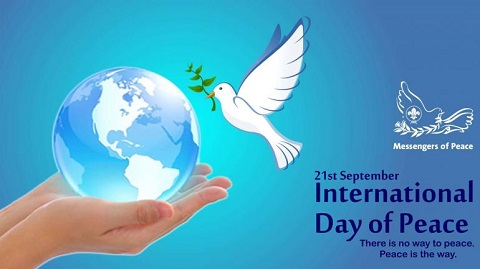 Kingston, Jam, September 26, 2016 –  Hundreds of persons converged in Sam Sharpe Square in Montego Bay, St. James, to commemorate the United Nations General Assembly’s (UNGA) International Day of Peace on Wednesday, September 21.  The day, which is observed annually worldwide, is devoted to strengthening the ideals of peace within and among all nations and peoples.

Montego Bay’s celebrations, held under the theme: ‘Building Blocks for Peace’, were spearheaded by the Peace Management Initiative’s (PMI) western branch in partnership with the Citizen Security and Justice Programme (CSJP).  The day’s activities included a peace march; worship service; discussions involving residents, community groups and churches, among other stakeholders; as well as a poster competition.

Western Regional Coordinator for the CSJP, Adenike Stephenson, told JIS News that the organization partnered with the PMI and other stakeholders to mark the day in response to the upsurge of violence in St. James

“We partner in these efforts to build awareness and to send a message that more Jamaicans need to stand up and put an end to what is happening in our country. All of us – residents, agencies, civil society and churches – need to come together,” she said.  Ms. Stephenson said the CSJP’s collaboration with the organizers was indicative of the stakeholders’ united approach in working towards culture change that facilitates and promotes peace.  She further said it demonstrates that they are working towards, among other things, offering opportunities for persons to come together and build a better Jamaica by changing the culture of violence.

The PMI’s Violence Interrupter for Canterbury in St. James, Reuben Robinson, endorsed the undertaking by the CSJP and other stakeholders to engender peace in his community by advocating for culture change.

“If I see youngsters over 18 years old in the community and they are jobless, it is my responsibility to get them a job or into a skills training programme.  I was a gang member, someone who never went to school…(and) PMI sent me to school.  Persons in my community know about me and who I was; so the youngsters will listen to me more readily than anyone else,” he said.

Mr. Robinson believes there is need for more interventions like the CSJP and PMI to address issues affecting persons, particularly youngsters.

“My vision for Montego Bay is for there to be less killing and police and civilians living like they are one. I hate guns; I want to see at least one week when no one dies here,” he stated

Under the violence interrupter initiative, rehabilitated criminal offenders are trained to anticipate where violence may occur and intervene to prevent its eruption.

This exercise often entails the facilitator developing relationships with gang members and familiarizing themselves with the profiles of various communities.

Its model is similar to Cure Violence, a programme in the United States that has been credited with yielding significant success.

Another Montego Bay resident welcomed the International Day of Peace celebrations, noting that the commemoration was very important to the citizens.

“We have children and we would like to see them grow up in a peaceful environment where they can go out and we parents do not have to worry for their lives. I would like to see everyone come together and youths put down the guns, stop the killing and work out their differences,” the resident stated.