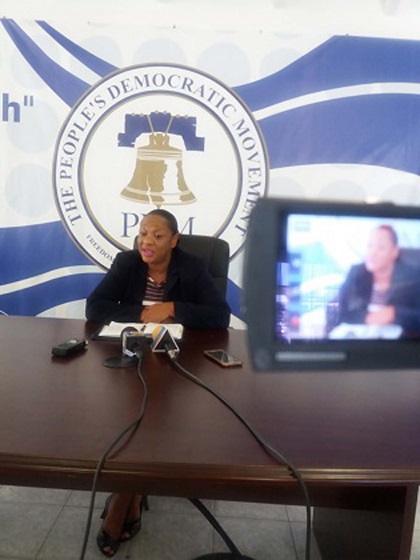 Providenciales, TCI, September 22, 2016 – In an unprecedented election season, there is an unprecedented level of mudslinging enabled by social media and fuelled by bad motives and one party leader yesterday spoke out, calling for people to stop the sinister attacks.  “I want to make it clear to the people of the Turks and Caicos that the People’s Democratic Movement will not be supporting the degradation or the pulling down of anyone’s character in this campaign season.”

PDM Leader, Sharlene Robinson said others have been victim and so has she, telling media at the party headquarters that it was a must that she set the record straight on a number of what she called, untruths circulating.  “And if you notice this has to be the most attacked opposition ever in the history of any country, people are obviously aiming to become the opposition and not the government, and we do know the source of a lot of the attacks.”  She will not target nor fire any civil servants if elected, she has not nor will she be meeting any foreign investor abroad to negotiate any shady deals, she can travel to the United States and that she is not and has never been under investigation.

Hon. Robinson explained that her report to Facebook forced the shut-down of a page set up to malign her and when it came to at least one incident involving her candidate for North and Middle Caicos, Ralph Higgs, she said his opponent – Mark Fulford of the PNP – claims big representation but is acting anything but big.  “But there are so many things that he can be speaking to rather than making up falsehood and showing people that he is not even abreast of the law under which he practices or running his candidacy.  Mr. Fulford has to understand that this is a different ball game than the primaries that he ran a few weeks ago where he can show up with person’s proxies.”

To the Premier’s comments and call for support from the Opposition party while speaking at the opening of the Overseas Territories Attorney General’s Conference being held here in Provo, the PDM Leader said the timing was tacky and the position is unfounded.  Mrs. Robinson, an attorney herself, explained that the CFO Bill cannot be repealed, that it is a constitutionally entrenched role and only makes room for the CFO’s job description to change after the bail-out loan would have been paid off.  She said the PDM would not support this motion, sharing instead the PDM’s plan for the UK appointed, Chief Financial Officer. “And if you’re doing it for a political stunt, the PDM certainly will not be joining you, and to call for the CFO repeal bill and ask for us at the tail end of his speech which I was made aware of when I saw the text, is nothing short of a political stunt, but I would certainly not support the continuing of the CFO in the role that he played during the garauntee while he was in place.  I anticipate that his role can be altered.”

Related Items:pdm leader gives her view on premiers speech about the current cfo, pdm says they will not support the degradation of anyone's character, sharlene robinson sets record straight on circulating rumors