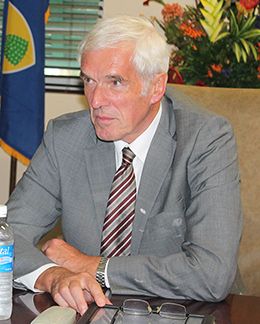 Providenciales, TCI, September 9, 2016 – There are no laws in the Turks and Caicos which require the prison or police to inform the public that a violent sex offender has completed prison time.  The Governor’s Office is the only entity responding so far to our queries on Robert Jackson, aka Black.

Jackson had been incarcerated for a string of violent home invasions, one involving a pregnant woman who was sexually assaulted; that case was from 2008.  The Governor’s Office said and I quote:

“I can understand the concerns that have been expressed to you. However, Mr Jackson served all of the period that he was committed to prison to serve and was released accordingly. There is no requirement within Prisons Ordinance for any victim or community notification when anyone is released from prison without this being for the purposes of parole. Although it is possible for prisoners to seek voluntary supervision upon release, there is no statutory supervision requirements contained within the Prisons Ordinance.” End quote.

The Governor adds that the Police are aware of Mr. Jackson’s release from Her Majesty’s Prison on September 2nd, 2016.