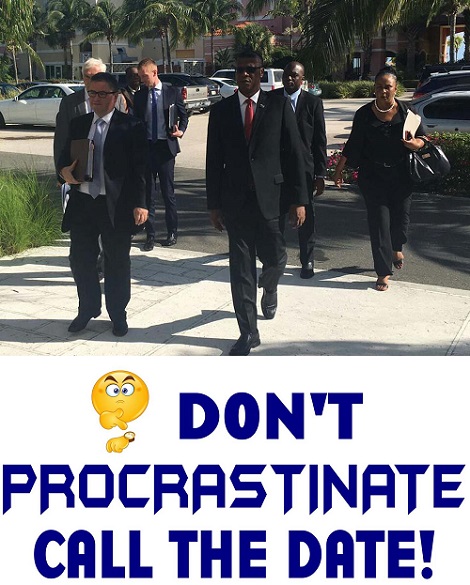 Providenciales, TCI, September 27, 2016 – A notice today from the clerk of the House of Assembly to members of parliament may be the answer to the hottest question in the country; when will the general elections be called?  If the dates for the upcoming meetings, where the last date listed is November 25, 2016 are the indication, then that means the TCI could be poised for a New Year season voting day.

House of Assembly meetings set by the Leader of Government Business, who is the Premier himself – Hon Dr. Rufus Ewing – are October 5-7; October 17-21; October 24-28; November 7-11 and November 21-25.  Constitutionally, the nation has to have a minimum of 35 days notice but can have as many as 90 days notice for a General Election date.  During her media meeting last week, PDM Party Leader, Hon Sharlene Robinson said, no matter what, the House has to dissolve four years to the date of its opening. The House of Assembly was opened with this new Rufus Ewing led PNP Administration on November 28, 2012.

This means that final date of November 25, 2016 for a meeting of the House of Assembly, fits perfectly within the four year time frame and strongly indicates that the TCI General Elections appear to be set for anytime after December 29 and could go into the third week of February.  But, if the time for a national vote is prolonged until February says the Opposition Leader, it means another constitutional breach as the House of Assembly cannot be on a three month holiday; it is mandated to meet every six weeks.

Hon. Sharlene Robinson, PDM Party Leader:  “But the house will automatically dissolve on the fourth year anniversary of the first time we met which would be the swearing in of November 28, so if the premier opts to go to February we will have another issue in that the house of assembly will dissolve automatically on the 28th November but the house is required to meet every six weeks.  So I can’t anticipate him being in February and the House dissolve in November how do we then comply with that provision that the House of Assembly should meet every six weeks.”

As for the highly touted and now much anticipated Joint Ministerial Council Meeting or JMC, which is set in London; that meeting is November 26 thru 27 which is the day after the House of Assembly meetings here are scheduled to conclude.

The PDM party recently erected a sign at their headquarters in Provo which says, ‘don’t procrastinate, call the date.’