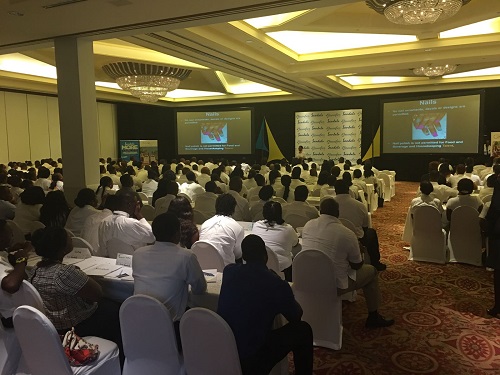 Nassau, Bahamas, September 26, 2016 – Excitement builds as hundreds of Bahamians begin orientation to prepare for positions when Sandals Royal Bahamian re-opens next month following a multi-million-dollar restoration.  Letters are still going out to prospective employees as the company seeks to fill 600 jobs at the historic property on Cable Beach.  As Construction continues at an expedited pace to open in time for the confirmed bookings, with jack hammers and back hoes in the distance, hundreds piled into a former ballroom at Sandals Royal Bahamian last week to begin orientation, preparing for new jobs as the iconic hotel is being prepped for a grand re-opening following a multi-million-dollar makeover.

“We are on target for a mid-October soft opening,” said Jeremy Jones, Director Corporate Services, SRI, which operates 14 Sandals resorts in the Caribbean including three in The Bahamas. “When you are doing extensive repairs in an historic property like the Royal Bahamian you learn to expect the unexpected. Despite extra work that had to be undertaken, construction crews and sub-contractors have brought their best game and have hit schedules remarkably well and we really thank them for that.”

More than a dozen Bahamian companies were engaged to work on repairs that were so extensive the hotel had no option but to close, according to an engineer’s report.  Hotel sources were caught somewhat off-guard, knowing repairs were imminent, but not fully aware the hotel would have to close to make way for the work.  The closure came in August as the Cable Beach luxury-included all-inclusive was enjoying nearly 100% occupancy and was facing a nearly fully-booked property for the next several months.

That closure resulted in the forced termination of some 600 staff members who received severance packages, with some senior members walking away with more than $34,000.  Sixty employees were transferred to Sandals Emerald Bay in Exuma to help accommodate the extra bookings from transferring guests who had reservations for Nassau.  Those guests were also treated to extra complementary days and the company covered the cost of airfare to the new destination.

At the same time, Sandals said there would be no overall job loss, pledging that the fully refurbished Sandals Royal Bahamian would employ the same number of people that it had on staff prior to the closing.  And days after the closure, it took steps to fulfill that promise, hosting a four-day job fair with the first two days reserved for former employees.  “Only about two-thirds of those employed before turned out for the job fair though everyone was invited,” said Jones.  “While we were a bit disappointed in the numbers, we were not totally surprised. The severance packages made it possible for people who had been working hard to take some time off.  Others may have chosen to go back to school or develop skills for a different position or career. For many, the unexpected closure and immediate pay-out opened up opportunities.”

As of September 25, nearly 180 of those former staff members who applied have begun orientation and there are still more positions to be filled.  “We continue to aim for a mid-October soft opening and we want to make sure all posts are filled with a six-month training cycle so there is little time to spare,” said Jones.  “Fortunately, everyone is showing tremendous enthusiasm and there is a real spirit of rejuvenation, a pride in being part of something historic and something new all at once.”