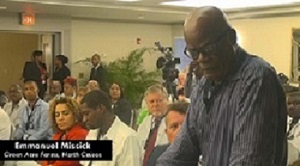 Providenciales, TCI, September 8, 2016 – When Invest Turks and Caicos Agency held its first national competitiveness conference last week at Beaches Resort, a controversial but lucrative concept was thrown out at attendees.
Invest Caribbean Now founder and Award Winning journalist, originally from Guyana but now resident in North Carolina – Felicia Persad said that Caribbean products are in high demand; she named coconuts with its healthy and revitalizing oils and creams and she named marijuana, now used legally in many states in the fight against debilitating illnesses like glaucoma.
Persad said it is high time the Caribbean begin to make the financial resources off of its own natural resources – both these products are netting profits in the billions.
Emmanuel Missick of Green Acre Farm in North Caicos agrees, he said he put in the request to grow medical marijuana and that he is waiting for the Premier, Health and Agriculture Minister, Dr Rufus Ewing to give him the green light.
The Invest Turks and Caicos Conference also featured presentation by Mark Durliat of Grace Bay Resorts and Dominic Rolle of Caya Hico Media.