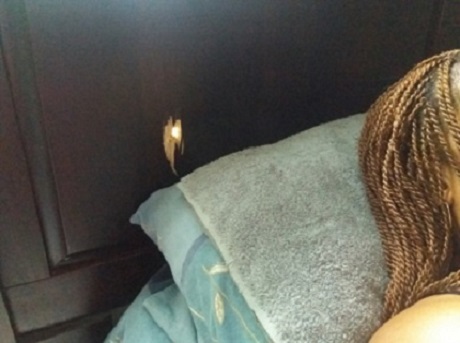 Providenciales, TCI, August 8, 2016 – WILD GUNSHOT too close for comfort for a Kew Town resident after a bullet sails through her window and bed headboard on Saturday.  Police were in pursuit of a robbery suspect and reported gunfire exchange.  Photos of the bullet holes can be viewed at Magnetic Media Fanpage on Facebook.

The woman said she had  just shifted her position on her bed when the bullet ripped into the upstairs unit through the screen, the pane of glass in her window and her wooden headboard.

Magnetic Media was given a tour of the apartment and was told a flock of Police came to the apartment; at least twice.  The woman, who is Jamaican, believes the bullet could have come from Police.

The single bullet was taken from her bedroom floor by officers.  Police told her that it could have been the suspect’s bullet.  Other bullet shells were collected in the area, which is a sort of courtyard where a 12 year old boy was playing during the wild gunfire exchange.  The suspect, though at one point reportedly cornered by officers, according to bystanders, got away.  It was said the gunshots were as many as four in the densely populated community.

Residents are incensed by the gun battle unfolding in their quiet part of Kew Town.  It is said a six- month old and 2 year-old also reside at the complex on the ground floor, where all of the action was happening.  It is unclear how the bullet fired on the ground, got all the way up to that tenant’s window.

No reply by Police to Magnetic Media queries as yet; which were sent on Saturday when this incident occurred.