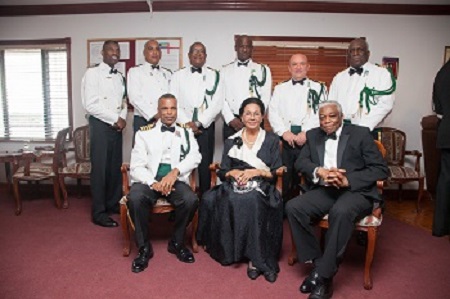 Coral Harbour Base, 25 July 2016 (RBDF) – Her Excellency Dame Marguerite Pindling, Governor General of The Commonwealth of The Bahamas was the special guest of honor at the Officers’ Wardroom Mess Dinner at Her Majesty’s Bahamian Ship Coral Harbour on Thursday past.

Attending the evening’s event was guest speaker, Mrs. Donna Newton, the Supreme Court Registrar, who spoke on the importance of Jury Duty and its impact on crime reduction in The Bahamas. Also, at the well-attended event was specially invited guest, Mr. Elsworth Johnson, President of the Bahamas Bar Association.

The Defence Force Officer’s Mess Dinner is a formal occasion in keeping with naval tradition that allows the Commander Defence Force (Acting) and his Officers to interact with each other and their guests while promoting camaraderie and team spirit.