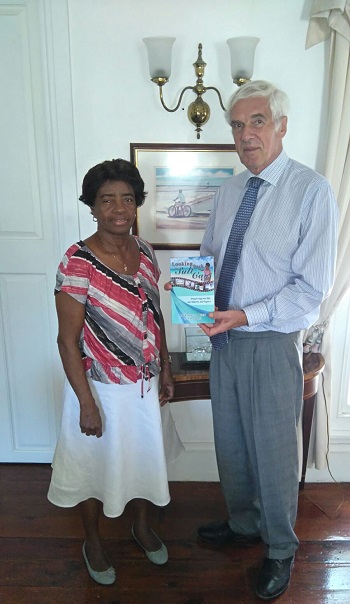 Providenciales, TCI, September 12, 2016 – Governor Peter Beckingham considers how we can preserve our history for future generations:

“Over the last month I’ve seen two great examples of how, in very different ways, people are working to preserve and protect the culture and history of our Islands. During the summer the National Museum, that wonderful building in Grand Turk, welcomed visitors who came to digitise a range of documents dating back to the 18th century. The papers, books and registers were suffering from age, heat and damp, and within years would have been illegible. But thanks to a grant from the British Museum and support from the US-based Zemi Foundation, our records of births, marriages deaths and much more will now be preserved for ever. As one of the visitors from the Bahamas explained, these records are a wonderful way of tracing ancestors and family history. Through the Museum they will be available to anyone wanting to research their antecedents.

“A long-time resident of Salt Cay, Petronella (affectionately known as Sister Peggy) Been has found another way of preserving the story of Salt Cay and its heritage, by writing her own memoirs of being brought up there as a child, and subsequently teaching at the school. “Looking Back in Salt Cay” is a colourful account of life over 50 years ago in Salt Cay, describing the ardours of collecting water and living without electricity, and the ways in which the community found to entertain and educate its children. Sister Peggy has gathered a rich seam of stories, all written with a freshness and happiness which makes a compelling read.

“One of the most striking differences between the Salt Cay in the book, and the present day island, is the big drop in population. “Looking Back in Salt Cay” describes over 100 children attending schools there. Last year, during  the Footseps4Good walk to raise money for the local school, there were no more than six children who joined us. This isn’t the place to dwell on the social and economic implications of this major population shift, but it is an issue the current residents of Salt Cay, and the influx of “snow birds” from North America and our Government, will need to consider.

“In the meantime everyone who has any connection with that beautiful treasure of an island, or has an interest in TCI’s history, will enjoy “Looking Back in Salt Cay”. I hope it will inspire others to consider ensuring they preserve the history of their families on all our islands.” – HE Peter Beckingham

Related Items:"Looking back in Salt Cay", HE Peter Beckingham, Petronella Been writes memoirs of Salt Cay, preserving our history for future generations