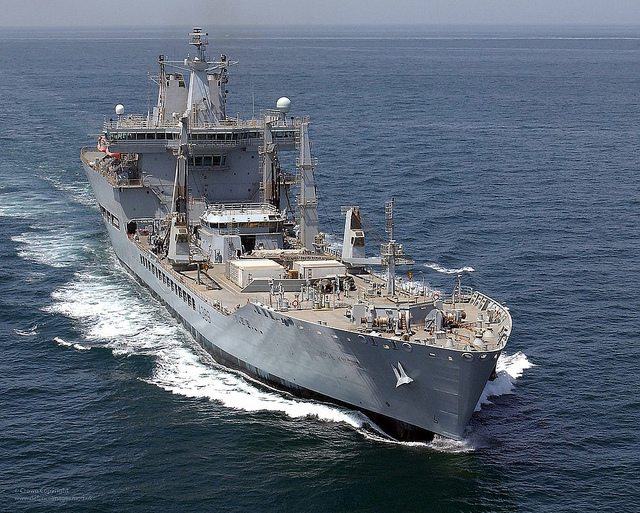 The Royal Navy’s Royal Fleet Auxiliary support ship, RFA Wave Knight, will visit Grand Turk from8-10 July as part of its deployment to the region to provide support and assistance to the UK’s Caribbean Overseas Territories and Bermuda during this year’s hurricane season.
RFA Wave Knight will arrive in TCI on Friday from the Dominican Republic which was the first port of call on its deployment to the Caribbean (and Bermuda) region during this year’s hurricane season. Four naval officers from the Dominican Republic will sail with the ship from Santo Domingo to Grand Turk to observe possible illegal fishing activity by DR fishermen in TCI waters. While in Grand Turk, the ship’s crew and accompanying Humanitarian Assistance and Disaster Relief (HADR) team of Royal Commando Engineers, who specialise in hurricane preparedness and disaster relief, will liaise with TCI’s Department for Disaster Management and Emergencies (DDME), emergency and medical services, Public Works Department and power and water utility companies to assess TCI’s state of readiness for this hurricane season and to see what assistance might be required, and where, in the event of a hurricane striking TCI. The ship’s Lynx helicopter will carry out aerial mapping survey flights with DDME staff and coastal surveillance with and on behalf of the Department for Environment and Coastal Resources (DECR) to check for illegal fishing. In addition to working with those organisations, RFA Wave Knight will host tours of the ship for TCI’s boy scouts and girl guides as well as a delegation of church representatives. The Commanding Officer, Captain Peter Selby, will host a reception on board RFA Wave Knight for a cross section of guests from TCI. During the ship’s visit, members of the HADR team and crew of RFA Wave Knight will be involved local community projects in Grand Turk.
Commenting on the visit, the Acting Governor, the Hon. Anya Williams, said, “I am delighted that RFA Wave Knight is visiting TCI and extend a warm welcome to Captain Selby and the ship’s crew to Grand Turk. At a time of severe pressure on the UK’s defence budget and stretched Royal Navy resources across the globe, the presence of RFA Wave Knight in TCI and the wider region throughout the hurricane season demonstrates clearly the UK Government’s continued commitment to support and provide assistance for the safety and security of the people of TCI and its neighbouring Overseas Territories.”