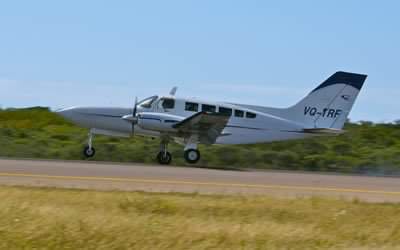 A partnership between the Turks and Caicos Islands Government and indigenous airline company, Caicos Express Airways is already bringing relief to a domestic route which was dropped five months ago.

Magnetic Media has confirmed with Captain Richie Arthur, co-owner-pilot of Caicos Express Airways that since Friday April 1, his company revived the commute between Grand Turk and South Caicos, and much to the delight of residents who had been forced to travel through Provo from South Caicos in order to get to Grand Turk, which takes more time and costs more money.
Captain Arthur said, “We’ve partnered in a subsidy initiative to provide nine flights weekly directly to South Caicos from Grand Turk and we think this is the right start.  Our hope is that it will be a long term arrangement with Government, as we want to continue the route and we think the people who needed this to be returned, want us to continue as well.”
Caicos Express Airways is right now serving the GT to South Caicos commute with a Cessna 402 eight-seater plane, but adds that if the demand is there, they can upgrade on size to the 19-seater.
“We have re-positioned scheduling and made the changes necessary and requested of us by a concerned government to accommodate the leg.  We didn’t have much time to meet the request but we recognized how taxing it had become for travelers to fly north and then back down south; taking passengers hours when the flight between the two islands is just 10 minutes.”
Caicos Express says the nine flights per week includes two flights on Tuesdays and two flights on Thursdays.