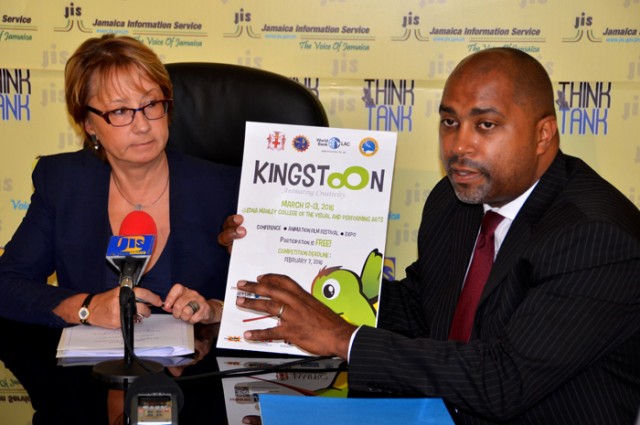 KINGSTON, Feb. 4 (JIS): The Government is moving to position Jamaica to tap into potential job opportunities in the global animation industry, estimated to be worth over US$222 billion and for which there is a demand for 30,000 animators.
Industry experts believe that of this number, 5,000 can be filled by persons from the Caribbean and, in this regard, the Administration is moving to capitalise on this by staging the second KingstOOn Animation Conference and Afro-descendant Film Festival.

The event, which is slated for March 12 to 13 at the Edna Manley College of the Visual and Performing Arts (EMCVPA) in Kingston, will, among other things, showcase the talents and creativity of local animators.

Speaking at a Jamaica Information Service (JIS) Think Tank forum, at the agency’s head office in Kingston on February 2, State Minister in the Ministry of Science, Technology, Energy and Mining, Hon. Julian Robinson was optimistic that Jamaica has animators capable of filling the job openings.
He pointed out that the country has a “population of creative, talented, and tech savvy youth, who are knowledgeable, aware, and sensitive to the nuances of the culture (particularly) in (the United States)”, which he said “is the major Western market for animation content.”

In noting that animation is considered one of the fastest growing industries globally, the State Minister said the outsourcing of content development by North American film and television producers is a significant emerging trend and “positive indicator” that presents entrepreneurship and employment opportunities for young people.

Mr. Robinson said the island’s proximity to North America and the fact that both are English-speaking countries, “ideally position Jamaica to serve (their) animation industry.”
He further argued that “our rich culture makes us a great source for original and innovative content that is in high demand globally.”

In addition to the United States, other major markets outsourcing a significant percentage of their animation content development include: Canada, China, France, Germany, and Japan.

Mr. Robinson advised that since 2011, the global industry has been growing at an annual compound rate of 12.94 per cent, with most segments growing at a rate of seven per cent “year over year.”
He pointed out that the Government foresees further growth as “consumers will continue to demand more realistic video games, movies and television special effects, as well as newer computer hardware.”

Mr. Robinson said as the Administration takes aim at positioning Jamaica as a centre for animation development, production houses, such as video game studios, will require multimedia artistes and animators to meet the increasing demand for content.

Additionally, he said the high demand for computer graphics for mobile devices could also potentially result in a spin-off of other careers, while pointing to possible opportunities away from mainstream animation, such as education, journalism, medicine, engineering, and forensics.