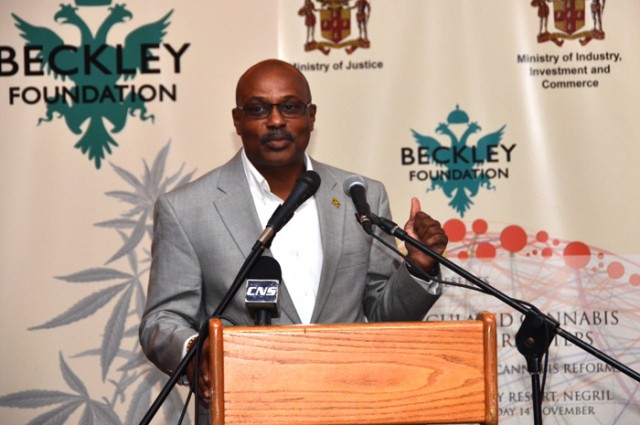 MONTEGO BAY, Nov. 16 (JIS): Chairman of the Cannabis Licensing Authority, Dr. Andre Gordon, says the organisation will operate in a completely transparent manner, as it seeks to regulate the local marijuana industry.

Addressing a conference on Jamaica’s Cannabis Reforms, at the Swept Away Resort in Negril, on November 14, Dr. Gordon said stakeholders in the industry will be kept abreast of all discussions and decisions, to ensure that there are no grey areas.

“Whatever we do that is not sensitive at the moment of discussion or decision will not be kept away from the stakeholders. We don’t expect and will not give anyone the opportunity to have any doubts about how licences are issued and who get licences,” he said.

Dr. Gordon emphasised that the guidelines which are used to govern the Authority will be made available to players in the industry, in an effort to keep everyone in the loop.

He reiterated that the main function of the Authority is to foster the sector’s growth and development, and regulate the legal marijuana and hemp industry in Jamaica.

“This will be done in a manner that is consistent with Jamaica’s international treaty obligations regarding the use and export of narcotic substances. Nothing that we do will contravene our international obligations,” Dr. Gordon assured.

The Chairman pointed out that under the amendments to the Dangerous Drugs Act, the Authority has been given the power to issue licences, permits and authorisations for the handling of hemp and marijuana for medical, therapeutic or scientific purposes.

Dr. Gordon added that while the organisation has no authority over the religious or sacramental use of marijuana, it will ensure that persons from that sector are given a level playing field on which to participate in a regulated and legal industry.

Dr. Gordon informed that three Orders have been issued by the Ministry of Science, Technology, Energy and Mining for the use of marijuana for research purposes and the Authority, by law, will maintain jurisdiction over the drug that is used for research.

Meanwhile, the Chairman said it is expected that the final regulations of the Authority are expected to be in place during the first quarter of 2016.

“The drafting of the regulations will start this month (November). We have agreed that we will have interim regulations to facilitate research and development work…for the Minister to take to Cabinet before the end of 2015. We expect to have at least the first set of final regulations in place by the end of the first quarter of 2016,” Dr. Gordon said.

NHF To Fund Survey On Eating Patterns Of Jamaicans