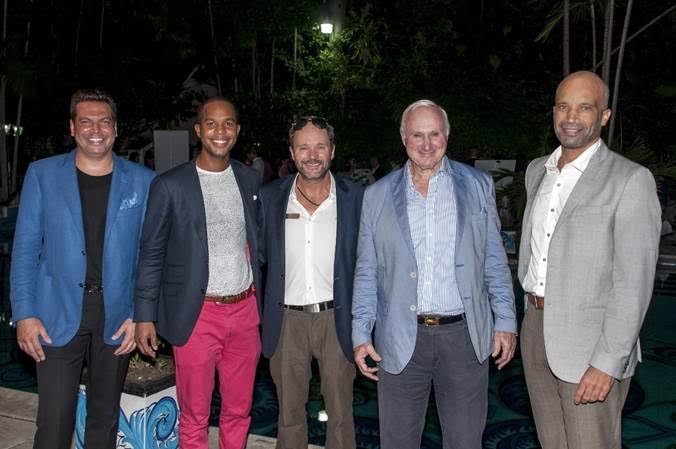 The Bahamas, 19 Oct 2015 – They came. They saw. They bought. It was a glitzy, glamorous residential real estate investment launch that met with such positive response it even took developers by surprise.

The launch, held poolside at Graycliff with flowing champagne, soft music and a night lit with a million stars, was designed to introduce the public to the first video views of Aristo Development’s latest foray into the luxury condominium market, THIRTY|SIX, a 38-unit ultra-chic complex on Bayview Drive, Paradise Island. Thirty percent of the residences were sold prior to the invitation-only event.

“We were overwhelmed by the positive response,” said Aristo President Jason Kinsale. “By the time the evening ended, we had even more reservations on units and by the next day, we were 50% sold-out with construction not due to start for another several months.”

John Christie, whose real estate firm HG Christie has the exclusive on the Paradise Island project, said both the turn-out and the results pleased but did not surprise him.

“Paradise Island is one of those rare gems that continues to shine regardless of temporary shifts in the global economy because for those who can afford it, there is no place quite like it,” said Christie. HG Christie broker Ryan Knowles agrees. “Where else can you go where you have instant access to all the amenities of a world-class resort like Atlantis two minutes from your doorstep yet retain all the privileges and privacy of your own luxury residence with 24-hour concierge service?” he asks.

According to Aristo Sales & Marketing Director Matthew Marco, the appeal of Paradise Island accounts in part for the success, but a large part is a reflection of Aristo’s reputation and a distinctive sense of style.
“This is Aristo’s fourth project and its first on Paradise Island,” said Marco. “So whether people are buying for their own residence or for investment, they can look at the track record and see that Aristo does not just promise, it is a developer that delivers.” Marco points to The Balmoral, a sprawling, well-landscaped and thought-out townhome and single-family residential community in Nassau that is completely sold out with the exception of two homes that are just being completed. “Last week there were three left, now there are two. Next time we speak in a few days there may be none,” he told the writer. “We had so much interest for townhomes at The Balmoral that we recently acquired 12 additional acres adjoining the development and are thrilled to announce a new and final phase with luxury townhomes starting in the $400’s.” Aristo’s first project, Hampton Ridge, was also a 100% sell-out with condos delivered on schedule.

And ONE Cable Beach, currently under construction is 45% sold at a point when underground and site work have just been completed and the bones of the building with its organic, flowing lines are hardly out of the ground. “The style of that building has just wowed the public,” said Marco. “There’s nothing like it anywhere in The Bahamas and I doubt anywhere in the region.”

THIRTY|SIX is the first project that has teamed Aristo with the equally successful Sterling Financial Group, an integrated private equity, real estate investment and development firm based in Nassau. Sterling’s Chairman and Paradise Island resident, David Kosoy, has said that the market is “hungry for an offering with the sophisticated style and quality construction of THIRTY|SIX.”

“Am I surprised at the early sales reports of 50% sold with start of construction a few months away? Not at all. I looked at the plans, the location, the amenities and I just knew this was a winner which is why I chose to become an equity partner,” said the man who with others has developed more than $2 billion worth of real estate in the North American market.

Of the 38 condominiums in the block-long striking, contemporary building that will feature walls of glass, extensive landscaping draping from roof to ground floor, fitness centre, elevators and underground parking as well as 24-hour concierge service, only two-bedroom units ranging from $675,000 to $1.3 million remain available. All the studio and one-bedroom units sold and nearly all the two-bedroom corner units have been reserved.

FortisTCI strong rating from Standard & Poor’s is hinged on stability