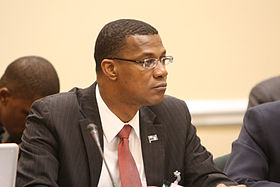 Providenciales, 03 Sept 2015 – The PNP Administration through Premier Rufus Ewing believes the country’s British oversight is being abused and the elected government is being ignored; these charges are linked to ongoing concern that the Governor and UK appointed CFO will go ahead with a multi-million dollar spend on security because they claim there is a ‘credible threat’ against the Special Prosecutor and her team.

In a statement today, the Premier said: “My Government is on record condemning this action, which, while being within the legal authority of the Governor and CFO, is considered by my Government to be an abuse of power and without proper justification. Even though I have demanded I am yet to receive any information about any threat to national security or the security of any members of the SIPT that warrants such exorbitant additional expenditure.”

The country’s leader reminded that the Turks and Caicos is a peaceful nation, he demanded a retraction and clarification by the Governor; who in his statements likened the matter to terrorism impacts in some around the world.

Premier Ewing also cited that the SIPT seems no further ahead in their investigation. “The SIPT has been operating in these islands for the last five years without incident, at the expense of the tax payers of this country, and they seem to be no further ahead than when they started but they certainly are richer.”

The Premier again stated that taxpayers have a right to know where and how money is being spent. The Governor in response to our questions said he agrees, but said the report on the financing of the now six year old investigation will come at the end of the trials which are set to begin in December.

As for what the PNP Administration is prepared to do about this, Hon Dr Ewing said they will continue to make representation at the Foreign and Commonwealth Office, to the Foreign Affairs Committee of the UK, continue to involve CARICOM and to take the matter all the way to Whitehall – which is the center of Her Majesty’s Government – if necessary.