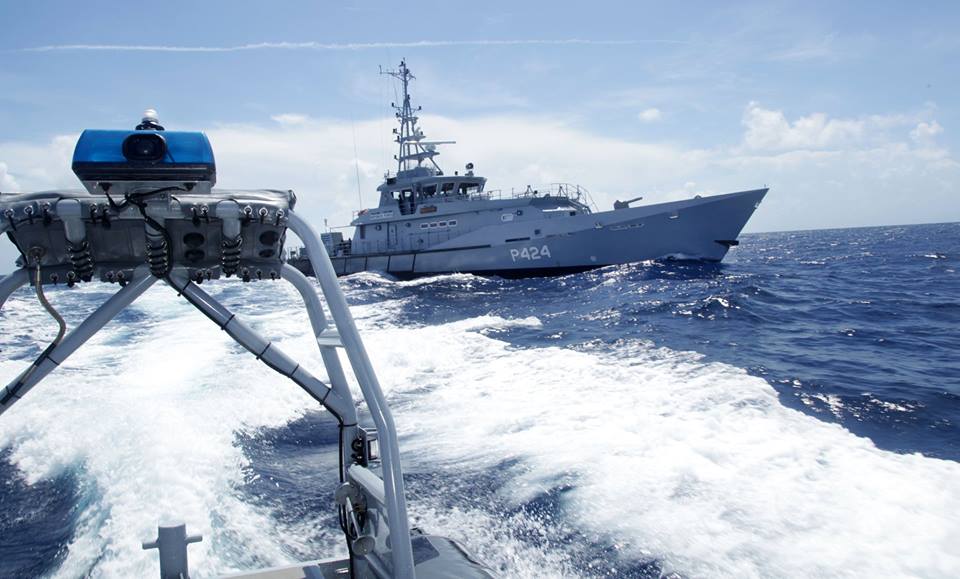 Coral Harbour Base, 3 Sept 2015 (RBDF): It was on a Thursday shortly before 8 p.m. when my cell phone rang. I looked at my phone for a brief second, thoughts began racing through my mind as I recognized the number and then I answered feverishly, “Hello?”. It was my senior on the other end of the line with a sound of relief in his voice, he replied.

“Good! You answered. I need you to make your way out at the port at midnight. You will join the ships company to slip harbor tonight in a couple hours for seven days to document the patrol. Have a safe trip and he hung up.

As I received my orders my heart skipped a beat and with no one else around to verify whether or not this reality was a dream or this dream was a reality, I had to just stop take a deep breath and relax. Even though the orders came hard and fast, I was eager to go out to sea. I was waiting on the opportunity to do my part as we prepared for the storm. I was ready to help prepare and protect my country, our country.

What should have been a typical 24-hour shift lined with fatigues to complete in the morning, suddenly became anything but typical. But what was I to expect? The Bahamas was in its first trimester of its hurricane season and Tropical Storm Erika was due to make landfall that upcoming weekend.

As a Marine Seaman on the Royal Bahamas Defence Force, it has definitely been a new experience for me. A marine can be called at a moment’s notice to perform his duties. That’s just the nature of the organization. Therefore, being in a constant state of readiness is crucial. However, in addition to individual preparedness, organizational preparedness is also important and this hurricane season showed me just how prepared we, the Defence Force, are in times of potential disaster.

As I followed the updates of Tropical Storm Erika, I learned that The Bahamas was lined up perfectly like bowling pins for a clean strike in hurricane alley. I saw citizens and residents making final attempts to protect life and secure property. Supermarket aisles were packed, store shelves were emptied, home cupboards were filled and anticipation for the oncoming tropical storm grew.

All the while, we at the Royal Bahamas Defence Force were also making preparations of our own. Though faced with a potential disaster, we took numerous precautions under the direction of Captain Tellis Bethel, the Commander Defence Force (Acting), and his command team to help safeguard our country and stood ready to provide assistance at a moment’s notice.

Subsequently, Advance Teams were dispatched ahead of the storm to various islands such as Mayaguana, Governor’s Harbour and Abaco to assist with the coordination and preparation of hurricane relief efforts. Impact Teams were standing by ready to provide immediate support to pre-defined Advance Teams and affected Family Islands for road, airport, and harbour clearing along with restoration of the basic utilities following the passing of the storm.

Defence Force Hurricane Shelter Managers were ready to be stationed at 25 shelters throughout New Providence. Standby Security and Urban Search and Rescue Teams were also established to provide immediate security assistance to shelter managers and local communities, in the event of security threats or missing persons. Teams were also formed to assist families of Defence Force personnel who were abroad and about to face the wrath of Tropical Storm Erika.

Marines were assigned to the National Emergency Management Agency (NEMA) to assist with the coordination of national hurricane relief efforts. Defence Force patrol crafts were dispatched to various locations throughout the Bahama chain of Islands, where they prepared for the aftermath of the storm.

Military Police Personnel were stationed at key Government and foreign diplomat facilities in New Providence to provide necessary security. Hurricane Platoons were also standing by to provide further support with hurricane mitigation efforts during and after the storm in Nassau and the Family Islands.

We seemed to have covered all the major areas of concern. Most people didn’t see any of it, but while the average Bahamian was on alert for Tropical Storm Erika making landfall, Defence Force marines were already out to sea and on the various family islands anticipating the potential disaster, positioning themselves for what was to come.

In a turn of events, Tropical Storm Erika, instead of striking The Bahamas, decided to throw a curve ball, swung around our archipelago and eventually dissipated. However, this provided the Defence Force with an opportunity to put our hurricane plan of action under a microscope, allowing us to identify both our strengths and our weaknesses for the next call of duty. This will undoubtedly enhance our plan of execution in the future if needed.

As some of the country’s best trained assets, sufficient gratitude cannot be expressed to the Defence Force marines who continuously and selflessly render their service towards our country’s defence, wherever and whenever called. Leaving your family behind is never easy at such a time, so I can tell my fellow brothers in arms thank you for your service because you are keeping my loved ones safe also as I am to yours.

The families of marines must also be acknowledged for their continued support of their loved ones during such times, as these brave men and women of the Defence Force are deployed to safeguard our heritage. Many of us were far from our families and homes, but as a nation, you did not allow us to be far from your thoughts and prayers.

Thank you to all our supporters. Your support and well wishes are always appreciated.