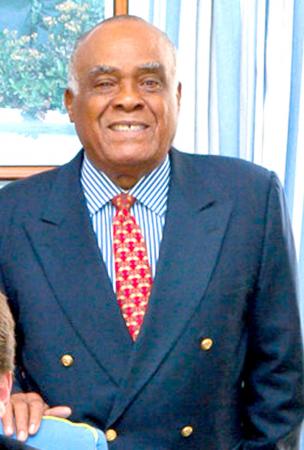 Nassau, 01 Sept 2015 – I begin by renewing my condolences, and the condolences of the Government and people of the Commonwealth of The Bahamas, to Lady Miller and the entire family of the great Bahamian whose passing we mourn today, even as we celebrate his life; a life that was blessed with the gift of long years and marked by devoted service to his country, to his family, and to the institutions, both public and private, that he served so ably and so loyally during his long and fruitful life.

The word “great” is one that we tend to overuse in speaking of the dead. In the case of Sir Albert Miller, however, we stand on the surest and most certain of foundations when we characterize him, as I unhesitatingly do today, as a truly great man and an authentically great Bahamian.

And it would do us all well today to reflect on the personal ingredients that went into making Sir Albert the great man and the great Bahamian that he indubitably was.

To begin with, Sir Albert was a man of character; a man of courage and conviction; a man of talent and ability; of dedication and of discipline; of generosity and of kindness; of loyalty and of service.

And Sir Albert applied these abundant resources of his being in a way that not only earned for himself great personal success in multiple sphere of endeavours; but they also earned him the appreciation, the admiration, and the gratitude of so many persons from so many different walks of life, particularly those who were helped by him in one way or another over the years.

In some instances, the help that Sir Albert provided was direct. Mindful, as he always was, of his own humble beginnings in Long Island and equally mindful of those thoughtful and compassionate persons who had helped him in his own personal development, especially after he had moved to Nassau in his teens, Sir Albert was always keen to extend a helping hand to those who needed it, especially young and promising Bahamians who were without financial resources to further their education or to launch their careers.

Sir Albert helped many such persons over the course of his life, especially in the latter part of his life when his own material blessings had grown considerably. He never hogged his wealth. Instead he saw to it that not only was his family generously provided for but that so many others, especially here in Grand Bahama, would be able to share in the fruits of his material blessings as well.

More often than not, however, we never heard of such generosity. Seldom did we know when Sir Albert extended a helping hand. Most of it he did anonymously, without fuss or fanfare, seeking neither recognition nor reward for doing the good that he was doing.

And so, whether it was extending help through the church or through some other institution or agency, or doing it more directly, Sir Albert never sought anything in return. The personal satisfaction of knowing that he was using his material resources to be of help to those in need was quite enough for him. It was not something he felt any need to crow about.

But Sir Albert helped others in less tangible ways as well. He did so not with money but by the power of his personal example. He was a born leader who, throughout his life, inspired so many others simply by exhibiting the same qualities of greatness that I ascribed to him earlier: his enormous courage; his skill and talent; his disciplined approach to work; his absolute dedication; his loyalty and of sense of service, especially patriotic service.

These qualities were deeply embedded in Sir Albert’s being. They were an integral part of who he was. And one could not help but be impressed and inspired by the Albert Miller who possessed them.

These qualities were as much in evidence during the first part of Albert Miller’s adult life when he was climbing the ranks of the Royal Bahamas Police Force as they were in the second part of his life when he was distinguishing himself as one of the leaders of the Grand Bahama Port Authority and the City of Freeport. He didn’t re-manufacture himself when he moved into these new roles in Grand Bahama. Instead he was able to call upon the same resources of personality, the same reservoir of talent, that had been so central to his outstanding success as a police officer in his earlier years.

And so, just as he had risen steadily through the ranks from the lowly position of Constable in his teens to the exalted post of Deputy Commissioner while in late 30’s, Albert Miller was subsequently able to climb the ranks of the Grand Bahama Port Authority to attain one higher post after another, culminating in his appointment as President and later as Co-Chairman.

In climbing the ladder of success, first in law enforcement and then later in the boardrooms of commerce and city-planning, Sir Albert demonstrated a consistency of high purpose and dedication, and a level of skill and ability that were truly inspirational to behold. He was a man of action. A man of purpose. A man who never settled for second best. A man who never asked others to make sacrifices or to do things that he himself was not prepared to do. He led by example.

And it was because he was that kind of man that Sir Albert Miller is justly remembered today as a true and enduring inspiration to those who worked under him or alongside him as well as those in the wider community who marked the manner of the man and drew inspiration from what they saw.

One of the really remarkable things about Sir Albert Miller’s life was how the first part of his life as a policeman was as impressive as the second part when, as fate would have it, he ended up in a vastly different career as a businessman and city leader – a kind of unofficial mayor even for the nation’s second city.

Most men who achieve great things in life do it in only one sphere. In the case of Sir Albert, however, he had the uncommon distinction of achieving greatness in two completely different spheres of human endeavour, one after the other.

I need not recall today the great contributions that Sir Albert made in these two different spheres of his adult life because I have already had occasion to do so in my official statement following his passing and also because others have spoken so eloquently to it already as well.

However, it would be remiss of me as Prime Minister if I did not on this solemn occasion express the gratitude of the government and people of The Bahamas for the uniformly exemplary and profoundly important contributions that Albert Miller made over the course of decades to help keep the people of The Bahamas safe from crime.

His courageous and unfailing dedication to policing was as extraordinary as the skills and talents he brought to the job. I have no hesitation whatsoever in saying that it was because of Bahamians like Albert Miller that the foundations of the Royal Bahamas Police Force were as securely established as they were.

Indeed the outstanding police officers of today rest upon the shoulders of legendary predecessors like Albert Miller. He was a policeman’s policeman, a mentor and role model of the first order. The generations of police officers that have since followed in his footsteps are therefore deeply indebted to him for the standard that he and others of his own generation set for them to emulate.

But it’s not just police officers. It is the nation as a whole that is in debt to Sir Albert for all of the personal risks and sacrifices he undertook in the service of the Bahamian people as a law enforcement leader extraordinaire; and for the fearless, incorruptible and expert manner in which he went about protecting the Bahamian people from lawless elements within our borders. He was one of the best. He really was!

For that I extend the sincere thanks of a grateful nation.

I also extend the thanks of the nation for Sir Albert’s second major area of achievement as a leading figure in the development of the modern city of Freeport in the post-Groves era. Sir Albert brought a uniquely Bahamian balance to the otherwise expatriate-heavy leadership of the Port. This was of invaluable help to the Port in re-setting the ship on the right course and in charting the way forward, taking due account of national sensibilities and popular expectations.

Sir Albert sensed these things almost intuitively, and being the man of superb judgment and intelligent insight that he was, he was able to exert great influence over the owners of the GBPA in crafting new and more relevant policies aimed at promoting economic growth and urban development for the good of all.

Sir Albert’s achievements in that regard cannot be underestimated. They represent yet another pillar upon which his legacy stands.

Finally, it would also be remiss of me if I did not again acknowledge how personally indebted I am to Sir Albert for all the wise counsel he so unselfishly gave me over the years.

Although I should have expected no less from the fellow Valley Boy that he was, I was always very grateful – and I still am – for how unfailingly generous Sir Albert always was in giving me sound and sensible advice, and for sharing with me his profound insights into so many different national challenges we face.

I close with these words:

Many years ago, one of the more colourful and controversial public figures in American history, the former Vice-president, Aaron Burr, had occasion to use a phrase that has special relevance, I think, to the great man we pay homage to today.

Burr was giving praise to a group of heroic men. In doing so, he described them as “the best blood of the country”. He was moved to describe them so not because of the nobility of their lineage but because of the courageous and patriotic service they had given and the excellent work they had done.

That phrase rings true today as well for Sir Albert Miller’s life, in all its fullness, reveals that there also flowed within him “the best blood of the country”.

And we are all the better for it.