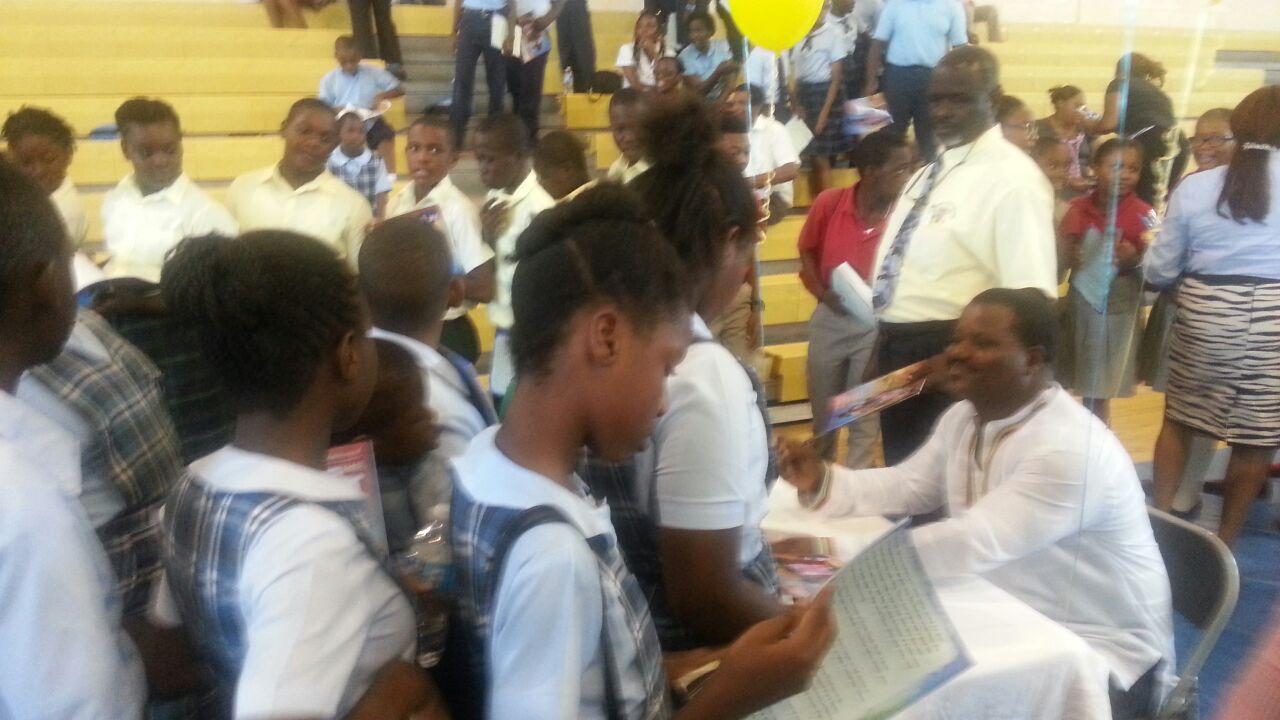 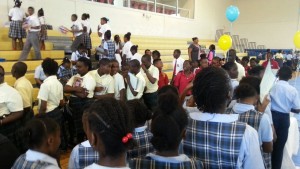 Providenciales, 02 Jun 2015 – A thrill for the near 200 students at the launch of a new TCI children’s book the Adventures of Auntie Fannie, Mattie and the Talking Potatoes when Deputy House Speaker, the Hon Josephine Connolly announced everyone there would get a copy of the book written by Bradley Handfield; that she and her family would buy each child their own book. Hon Connolly also bought books for Shining Stars and Best Institute schools. One dozen schools were represented a the book signing and launch this morning and also making generous donations were Hon Sean Astwood and his father, Louis Astwood to Enid Capron Primary in Five Cays; HLB’s Drexwell Seymour making a donation of 20 books among the schools he sponsored, Precious Treasures; Carolyn Murgrove who blessed three different organizations with books including Champions for Christ and Church of God of Prophecy in Blue Hills; Dervant Quant of Precious Memories who gave to the Wesley Methodist School; Hon Ruth Blackman who sponsored books for Iris Stubbs Primary in South Caicos and broadcaster, Damian Wilson who gave to his alma mater, Ona Glinton Primary in Grand Turk.

LIME purchased 30 for Oseta Jolly Primary School, Lewellyn Handfield of Lew 1 Shipping gave to Doris Robinson Primary in Middle Caicos; Ianthe Primary School in the Bight, Richmond Hills Preparatory both got donated copies and courtesy of the Assemblies of God Churches – The Bahamas and Turks and Caicos, Community Christian Academy received a dozen copies. D&B Auto was a sponsor; so was Shanwell Gardiner of Accu Diagnostics who took care of his old school Adelaide Omeler Primary in Bottle Creek, North Caicos and Premier Rufus Ewing also bought books, his purchases ensured children in Salt Cay and at Provo Primary can read the adventure of Auntie Fannie & Mattie by Bradley Handfield. The event proved an overwhelming success in a season when more and more natives are clamoring for a stronger show of Turks and Caicos culture.