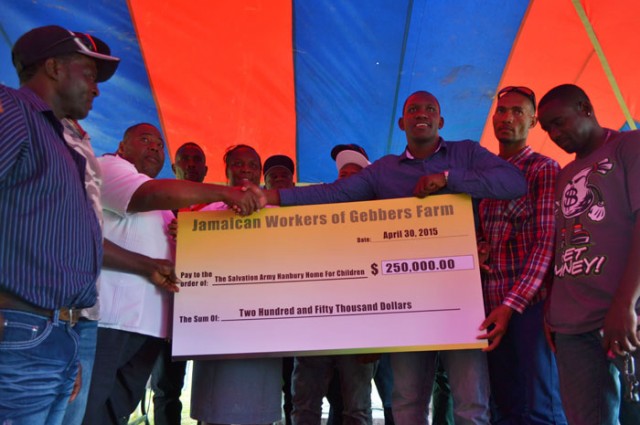 Providenciales, 06 May 2015 – KINGSTON, May 5 (JIS): Cash and supplies worth more than $250,000 have been donated to the Hanbury Children’s Home in Manchester, by Jamaican farm workers employed overseas, through the Ministry of Labour and Social Security.

The presentation was made to the home on April 30 by farm workers attached to Gebbers Farm in the state of Washington, in the United States (US).

The donation will be used to renovate the home’s dining area and to revitalise its backyard gardening project.

Camp Supervisor at Gebbers Farm, Eyon Gayle, told JIS News that the donation to the home, which caters to children up to 18 years old, resulted from the group’s desire to give back to the most vulnerable in Jamaica.

“The interest started from our Jamaica 50 celebrations when we were away in the US working in 2012 and we wanted to have our own event, so we planned our own Jamaica Day, cooked and sold Jamaican cuisine. It was decided that the proceeds would be given to charity or some vulnerable group in Jamaica,” he said.

Along with the group’s cash donation, the children’s home also received seedlings from the Rural Agricultural Development Authority (RADA) and 30 fruit trees from the ‘Trees That Feed’ Foundation, an overseas charity organisation established by a Jamaican.

Mr. Gayle said the smile on the children’s faces made the experience memorable and would encourage them to continue their support to their homeland.

“To see the smiling children in Manchester was a joy for us and pushes us further to want to contribute. It is good to know that we are making a meaningful contribution and that it will enhance their lives. We just can’t stop at this time,” he said.

The farm workers made their first donation of $250,000 to the Golden Age Home in Vineyard Town back in 2013. This amount was matched by their employer who was impressed by the group’s philanthropic venture and donated to the Golden Age Home located in the West Kingston community of Denham Town.
Last year, the offices of the Overseas Employment Service Centre on East Street benefitted from the second donation of $250,000 to erect a gazebo. The amount was again matched by the operators of Gebbers Farm and presented to Garland Hall Memorial Children’s Home in St. James.

Gebbers Farm has been a participant in the Ministry’s Overseas Agricultural (Farm Work) Programme since 2010. Currently, there are over 500 Jamaican farm workers employed on the farm, engaged in fruit-picking activities.