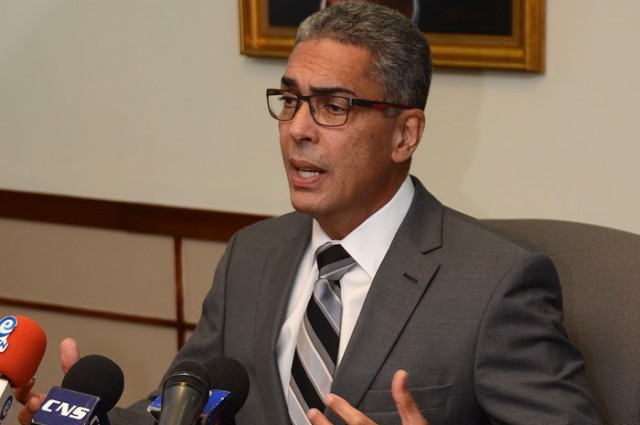 KINGSTON, May 5 (JIS): Co-Chair of the Economic Programme Oversight Committee (EPOC), Richard Byles, says Jamaica is in a good position to receive a positive performance rating from the International Monetary Fund (IMF) despite missing the primary balance target for March.

The EPOC Co-Chair said it was the first quarter that the country did not meet its primary balance target.
“This country has met the targets seven out of the eight quarters that the IMF has reviewed us. In one quarter, we fall short by $4.1 billion out of $121.3 billion, so that’s less than four per cent short of the target,” he pointed out.

He was speaking at EPOC’s monthly press briefing in Kingston on Tuesday
(May 5), where an assessment of the country’s economic performance as at the end of March was provided.
Mr. Byles said the previous successes are important and the IMF team must now “make a decision based on important qualitative judgement that goes beyond just the numbers.”

He said these considerations should include whether the Government remains committed and displays the effort needed to achieve the critical targets under the programme and whether the macroeconomic circumstances that were beyond the control of the authorities are sufficient enough to impact the targets.

“The answer to both is yes…and I think that I can say unequivocally from EPOC’s point of view, the IMF should give the country a waiver based on these two facts,”
Mr. Byles asserted.

The IMF team is now in the island conducting its 8th quarterly review of Jamaica’s performance under the Extended Fund Facility (EFF) programme with the multilateral agency.