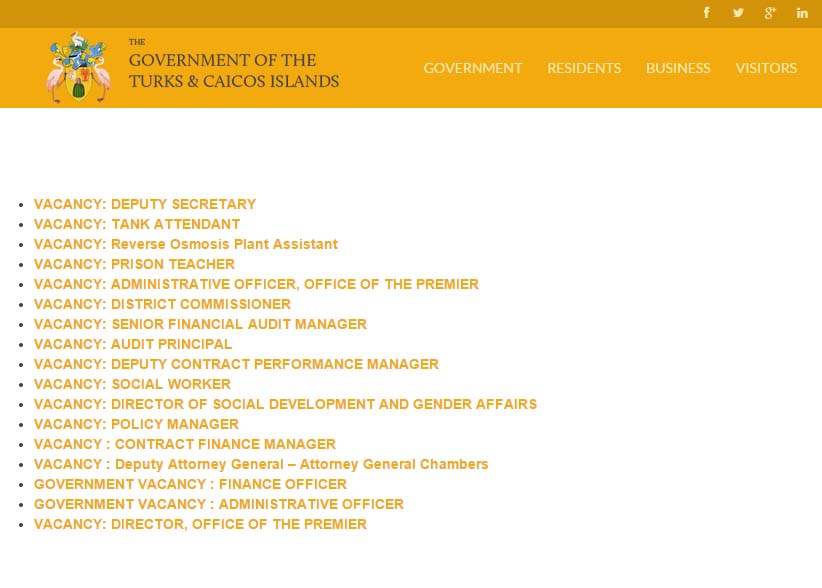 Providenciales, 24 Apr 2015 – Fifty five government jobs are available this fiscal year and to help islanders make easy application for the positions a website was yesterday launched by the Turks and Caicos Islands Government. There are some pretty significant positions up for grabs too including Director in the Office of the Premier, three District Commissioners for North Caicos, Middle Caicos and Salt Cay and government needs a Deputy Secretary of Tourism.

The Deputy Governor heads up the Public Sector and Anya Williams said: “The Office of the Deputy Governor’s recruitment plan will manage the process of recruitment to the public service throughout the year, and will see the recruitment of senior and critical positions take place in late Spring and technical and support positions recruited to in the second half of 2015.” There are some vacancies now though, according to the DG. “We have several new units which require staff as well, such as the Interhealth Canada Contract Management Unit and the Juvenile Facility and are currently in the process of recruiting some 20 positions.” AS for the website address, you can look for our report on Facebook, Twitter, Instagram, LinkedIn, WhatsApp or at our website, MagneticMediaonTV.com. GOVERNMENT JOBS SEEN HERE: http://www.gov.tc/government-vacancies