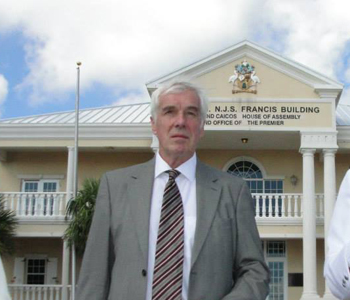 Providenciales, 02 Mar 2015 – HE The Governor spoke at the Turks and Caicos Islands’ Annual Hotel and Tourism Association Awards dinner on 26 February, saying that everyone in Turks and Caicos, from MPs and developers to taxi drivers and bar staff, should congratulate themselves on the country’s impressive tourism figures.

“Our reputation is riding high in our key North American market, as the Premier and I saw in New York last December,” the Governor said. “Many tour operators were telling us how attractive TCI has become as a tourist destination, and I was left in no doubt that our brand is in great shape thanks to the hard work of the Tourism Board, developers, and all those who work in the industry.”

The Governor also noted how important first and last impressions at the Airport were to retain and develop business. “We don’t have hard, statistical information, but my strong impression is that our Immigration and Customs Officers have made a real effort over the last year or so to give visitors a warm welcome when they first set foot in TCI. Recent visitors from London, as well as one of the UK’s most senior overseas diplomats, have told me that they have had a very positive experience on arriving in TCI.”

The Governor concluded by saying that not only Association members, but everyone living in TCI, should take credit for the Territory’s robust tourism growth.
“I was able to tell the visiting European Union Ambassador to TCI that we are now one of the best performing tourism destinations in the region. Our low crime rate, and our high quality product, is proving a magnet for North American visitors, not least when they can escape the winter chill.”