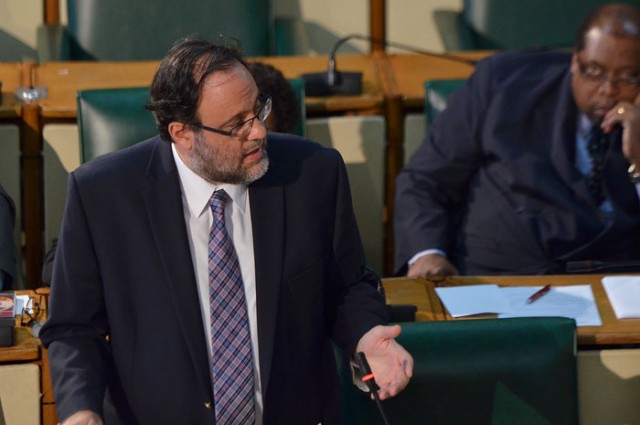 KINGSTON, Feb. 7 (JIS): Regulations guaranteeing automatic removal of an offender’s criminal record for convictions relating to the smoking or possession of small quantities of ganja are currently being drafted by the Ministry of Justice.

This is one of several key provisions being facilitated under the Criminal Records (Rehabilitation of Offenders) (Amendment) Act 2014, which came into effect in October last year.

Providing details of this development, Portfolio Minister, Senator the Hon. Mark Golding, informed that the regulations are expected to be ready for him to sign by next week, after which they will be brought to Parliament to be approved.

The Minister was addressing a Town Hall Meeting relating to this landmark legislation, held at the St. Andrew High School for Girls in St. Andrew on February 5.

The Minister explained that previously, under the law, automatic expungement of these records would be a discretionary matter for the Criminal Records (Rehabilitation of Offenders) Board, and persons would not necessarily be entitled to it.

“It is a discretionary remedy. But in the case of the small quantity of ganja or smoking, you do not have to wait for any rehabilitation period. You can immediately apply for expungement and you’re immediately entitled to it; there is no discretion, it’s a right that you have,” the Minister said.

He noted that this new provision is already being implemented administratively by the Criminal Records Office where, if persons apply for their criminal record, and it is seen where there is a conviction for smoking or possession of a small amount of ganja, that record will be expunged before it is issued. “So, you don’t even have to go to the Board,” the Minister explained.

Mr. Golding said this “really is a transformational amendment, because of the fact that the convictions for ganja had affected so many people,” pointing out that between 2012 and 2014, the Ministry received 2,881 applications for expungement, before this legislation was brought into effect.

Of that number, 1,788 were approved, 147 were refused, and the others were either returned for one reason or another or deferred.

Senator Golding said that having a criminal record “for what was, in fact, a very minor and common offence” had serious disabling effects for persons, because it meant that they were unable to gain employment with the Government, and they could not apply for a visa successfully for certain countries.

The Town Hall Meeting was staged by the Justice Ministry and covered topics including: overview of the amended legislation; automatic expungement for minor offences; qualification for expungement; and the application process for expungement.

Conflict after Consultation: how OPEN does TCI have to be?

Ebola Unit at Cornwall Regional to be Completed this month