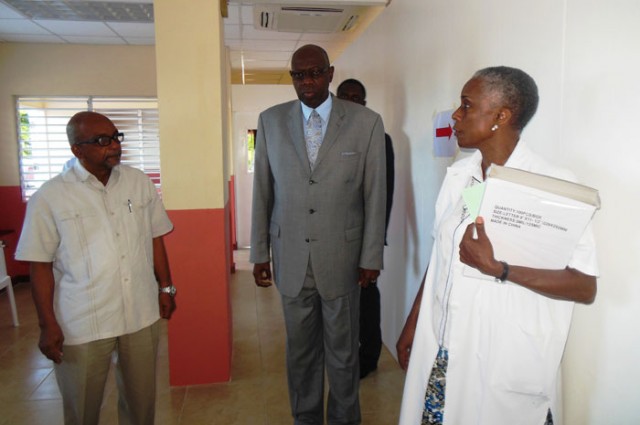 MONTEGO BAY, Feb. 10 (JIS): The Ebola isolation unit and triage, being established at the Cornwall Regional Hospital in Montego Bay, should be up and ready by the middle of this month.

“It just needs minor fixtures to be put in place and certainly, by the middle of February, it should be fully completed,” he said.

Mr. Smykle informed that the facility will serve as a specialised centre for the isolation of any possible cases of Ebola in western Jamaica.

“It’s really a specialised area and a lot of the layout would be similar to what is in a hospital setting…just that the fixtures are very specialised…very expensive, and it would have to be amenable to being washed down properly. The layout …was done in consultation with the various technical officers in the Ministry of Health,” he informed.

He told JIS News that the training of health workers to deal with possible Ebola cases is ongoing.
“The Cubans were here based on an initiative by the Minister of Health (Hon.
Dr. Fenton Ferguson,” he said, noting that there is also ongoing training on Ebola and other diseases with the United States Centers for Disease Control and Prevention (CDC), and the Pan American Health Organization (PAHO).

Construction of the Ebola-isolation facility and the triage area at the Cornwall Regional Hospital is being undertaken at a cost of $30 million.

The hospital already has a supply of protective gear, including hazmat suits.

Regulations being drafted for Automatic Removal of Criminal Record for Ganja