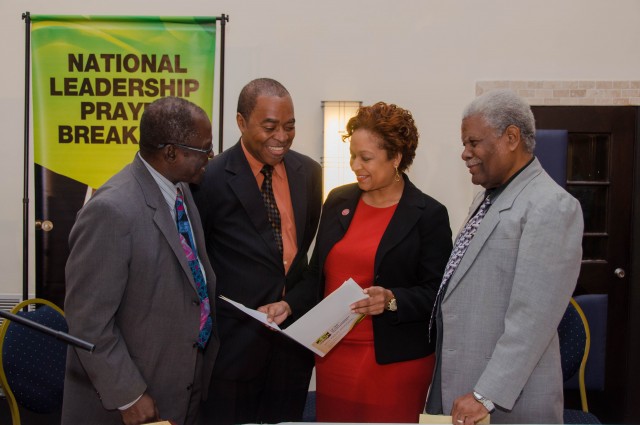 KINGSTON, Jan. 8 (JIS) – Persons who have been victims of human trafficking are to be assisted with rebuilding their lives, through proceeds from this year’s staging of the National Leadership Prayer Breakfast.

This was announced during a press briefing held at the Jamaica Pegasus Hotel in Kingston today (January 8) to launch the event.

Providing details on the social project to be undertaken this year, Secretary of the National Leadership Prayer Breakfast Committee (NLPBC), Clyde Edwards, said it would be incorporated into proposed plans by the Ministry of Justice and the United Church in Negril “to help those who have gone through the trafficking challenge and to provide for them housing and rehabilitation.”

Human trafficking is estimated by the United Nations to be a US$32-billion per year global trade.
Jamaica is a source, transit, and destination country for women and children trafficked for the purposes of sexual exploitation and forced labour.

Victims…2
In the meantime, highlighting the importance of the theme for the event: ‘Restore…Reconnect…Rebuild with God’, Chairman of the NLPBC, Rev. Dr. Stevenson Samuels, said the committee considers it necessary to challenge the nation to rebuild and reconnect with God.
“As nations enter into new periods of growth and development, the need for rebuilding and reconstruction becomes very necessary, old systems and models become outdated and archaic. They therefore become irrelevant for the new circumstances which face the nation,” he said.

Rev. Samuels noted that many citizens, including members of the Diaspora, are calling for the creation of a new Jamaica where peace and respect will be major features of the society.

He said that while the committee joins in this call, it recognises that the change has already begun, pointing to the improved performance in Grade Six Achievement Test (GSAT) and the Caribbean Secondary Education Certificate (CSEC) examinations; more young people accessing tertiary education; and that new entities have been established to promote integrity and eradicate corruption.

This is the 35th staging of the event, which will be held at the Jamaica Pegasus on Thursday (January 15), starting at 7:30 a.m., under the patronage of the Governor-General, His Excellency the Most Hon. Sir Patrick Allen.

The speaker will be pastor from the Calvary Baptist Church in Montego Bay,
Rev. Everton Jackson.

The event will be preceded by a week of prayer (formerly referred to as a prayer blitz), which begins today (January 8).

Attendance at the event is by invitation only and includes leaders of the church, State and civic life. The event will be carried live on the Internet and on television.

The purpose of the annual prayer breakfast is to foster greater unity in the nation, particularly among leaders at all levels, through prayer and fellowship.

The first prayer breakfast was held in January 1981 arising out of the church’s concern for peace and justice, reconciliation and unity in the nation.

Victoria Mutual Building Society (VMBS) has been sponsoring the event for the past 30 years.

Giant of a Lady Gone

SIGNIFICANT BENEFITS TO FLOW FROM CELAC MEETING IN CHINA