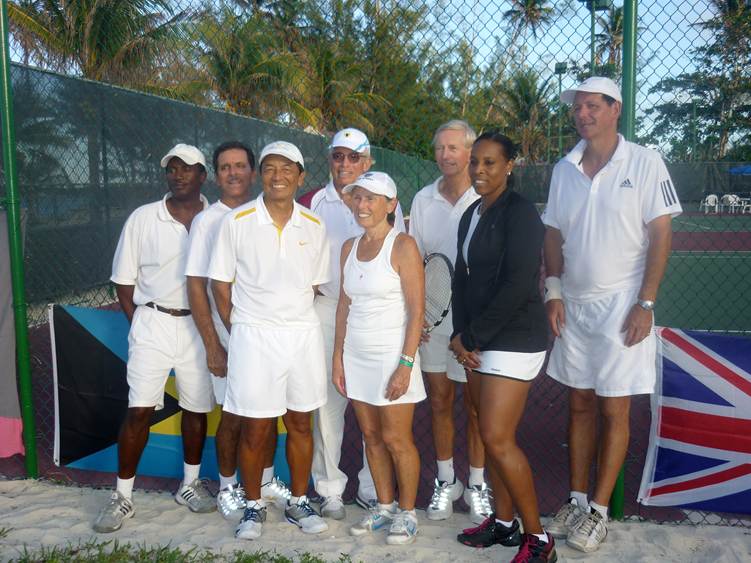 Nassau, 09 Jan 2015 – Tennis teams from the USA, Great Britain, Canada and Barbados will be competing with The Bahamas in the third Bahamas International (IC) Tennis Doubles Week to be held at Breezes SuperClubs, Cable Beach from Monday 12th to Friday 16th January.

Teams are from the International Tennis Clubs of the world (IC’s). These are clubs of players who have represented their country, won national titles or who are strong players who have contributed to the development of tennis. For them, it is a means of keeping up the camaraderie and competition from younger days when many played Davis Cup and Fed Cup competition. Their motto is “Hands across the net, friendship across the ocean”.

The Bahamas event is for a combined team of men and women in several age categories from 40 years to 65 plus years and allows for a “combined age” in a doubles pair. Each team plays every country over five days in two men’s doubles, one ladies doubles and two mixed doubles.

At the last event The Bahamas came a close second to the USA and both teams are among the favourites again this time.

President of The Bahamas International Club (IC) Kit Spencer, talking about the event, said thank you to SG Private Banking for their continued support of this competition which helps The Bahamas bring teams from overseas for some great tennis and camaraderie in a top winter destination.

Bahamas team captain John Antonas said “Last time we finished a close second to the USA losing 3 matches to 2 with them. We are an even stronger team this time so we have a realistic shot at winning. As well as myself, we have on our team: Larikah Russell, Kim O’Kelly, Sue Kimball, Neil Mactaggart, Sandy Reid, Mas Kimball and Kit Spencer. All have won national titles in their age groups and three of us have represented The Bahamas in Davis Cup and Fed Cup events. The referee for the event is Mickey Williams.
For more information on the International Club go to www.ictennis.net where you can also click on The Bahamas site.