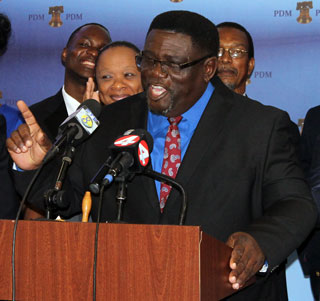 Providenciales, 26 Jan 2015 – Disgruntled PDMs and PNPs and PPPs are reportedly who will compile a slate of candidates of independents in time for the 2016 General Elections in the Turks and Caicos Islands. Explained initially on radio and then in a newspaper article featured in the Turks and Caicos Weekly News. The stunning headline reads: ‘Skippings is Back’ and the report allows the former People’s Democratic Movement Party leader and former Chief Minister to say that and I quote: “Our intention is to contest the election – we can do that as an independent group collectively and if it becomes necessary we will form a party.”

The politician who gave up leadership of the PDM after an unsuccessful bid on the national ticket as an at large 2012 General Election candidate says the group will determine if he runs with intent on becoming Premier of the country. In the lead up to the last run off, Oswald Skippings dubbed himself a national politician and ran at large securing 2,902 votes and placing eighth of 12; not among the first five At Large candidates who would go on to become House of Assembly representatives. It begs the question, since the electorate so recently demonstrated insufficient support of his candidacy, what has given Oswald Skippings the confidence to return to the fray? The preacher and veteran politician told the publication: “I was called on and call out by a whole lot of people who are hurting…” His PDM party has issued no formal comment on this new development.