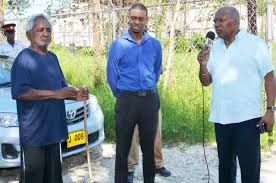 MONTEGO BAY, Jan. 18(JIS): The Government is moving to distribute over 45,000 certificates of title which are ready for delivery to property holders, islandwide.

Minister without Portfolio, Ministry of Transport, Works, and Housing, Hon. Dr. Morais Guy, says the certificates, to be distributed under the administration’s National Titling Programme, have been prepared by several Ministries and state agencies.

These, he informs, include: the Ministries of Transport, Works, and Housing; Water, Land, Environment, and Climate Change; and Agriculture, as well as the Administrator General’s Department; and Housing Agency of Jamaica (HAJ).
Speaking during a two-day tour of 12 informal housing settlements in Central Westmoreland, last week, Dr. Guy advised that delivery of the titles is being prioritized in recognition of the fact that “if titles get into the hands of the individuals then, certainly, it will contribute to the economic growth and development of this country.”

In relation to the tour of the Central Westmoreland settlements, Dr. Guy said the exercise was aimed at updating occupiers of the lands on the negotiations being spearheaded by the Ministry to acquire the properties, and, thereby, assist in formalizing the residents’ holdings.
He advised that the negotiations are at various stages of completion and that the Ministry is moving to expedite the process to acquire the lands from the public and private sector agencies and entities that own the lands, with which discussions are being held.

These include: the Westmoreland Parish Council; Housing Agency of Jamaica (HAJ); Commissioner of Lands; and DALCO Limited.

The occupants are expected to receive certificates of title for the lands, after the negotiations and other formalities are completed.