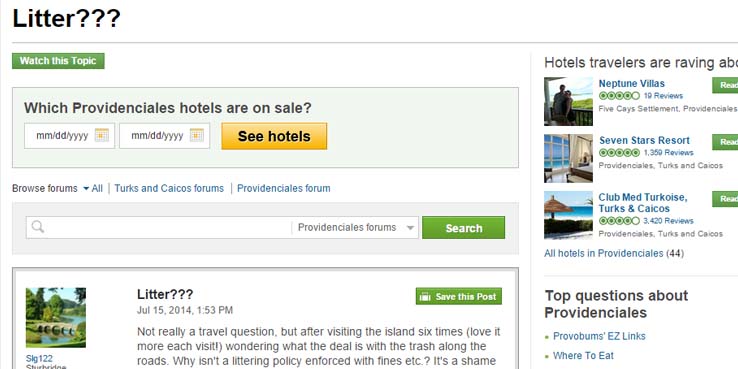 Providenciales, 16 Jan 2015 – Photos of garbage keep coming to Magnetic Media… pics of the beaches with garbage strewn everywhere and yesterday along Leeward Highway within the median running parallel to Graceway IGA we saw that it is filthy. This is a main thoroughfare for residents and visitors to our island nation which touts as its motto, ‘Beautiful by Nature’.

The garbage is not going unnoticed by visitors either; here are just two recent comments posted to Trip Advisor by regular guests to the TCI: Not really a travel question, but after visiting the island six times (love it more each visit!) wondering what the deal is with the trash along the roads. Why isn’t a littering policy enforced with fines etc.? It’s a shame people are so negligent!!!”

On the same string, another comment says: “that’s weird I was just thinking the same today…I went over to Bugaloos and saw a lot more litter on the roadsides than usual…I know that times are hard because of a massive national debt, the British government is trying their best to sort this out for the country but there is no quick fix, because of the lack of money many projects like sorting out the pot cakes (friendly wild dogs) and removing litter seem to have been forgotten… I guess it will continue like this till it gets out of control. The good news is the resorts are spotless…”

Those were posted in July last year. Littering is against the law, punishable by fine or imprisonment.