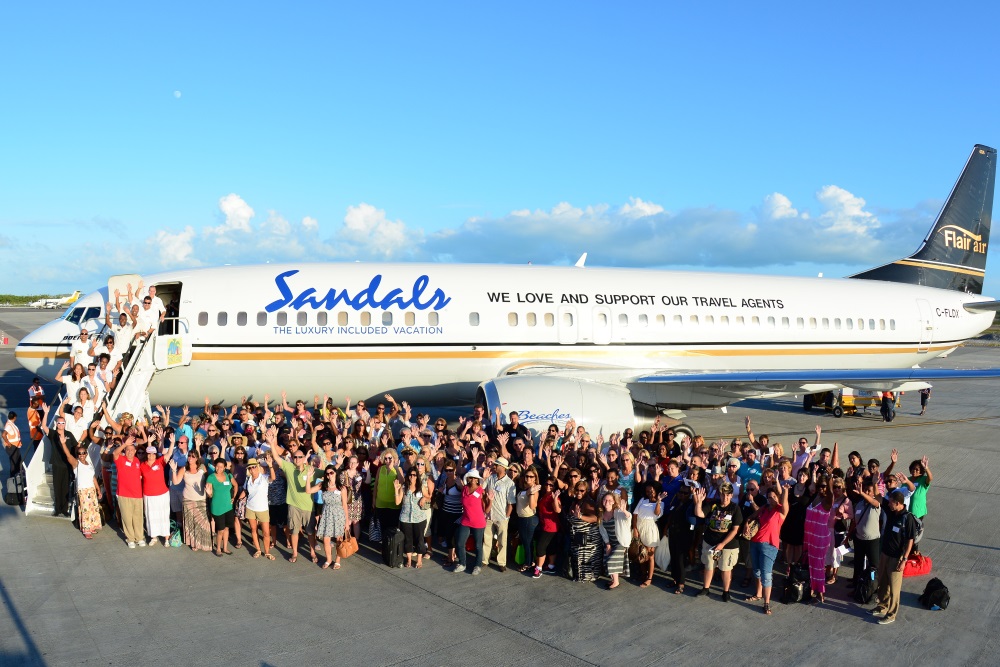 Beaches Turks and Caicos has proclaimed its recently concluded Travel Agent Megafams programme as its most successful ever with over 2,720 of North America’s top travel agents visiting the country, most for the first time.

The much-celebrated orientation programme saw agents jet into Providenciales in the Turks and Caicos Islands from key travel gateways throughout the vital North American region via 20 specially-chartered airplanes, including six wide bodied jets, at a cost of over US$5 million to the resort company.

Sandals Resorts International Chairman Gordon ‘Butch’ Stewart commented, “The Travel Agent Megafams is the single biggest trade programme ever seen in the Turks and Caicos Islands and this latest campaign has generated unprecedented levels of the exposure for Providenciales and the country as a whole. It is a huge exercise and once you factor in the cost of chartering the aircraft, the taxis, food and beverage, entertainment and everything else, it’s a substantial investment but the long term benefits to the destination are immeasurable.”

“The quality of the agents we bought down to Provo was of paramount importance. They were the best of the best; each highly qualified and carefully veted beforehand and in many cases travel hundreds of miles to the airport from the surrounding cities and states to attend. These individuals possess the ability to have a game-changing effect on the TCI tourism industry and bringing them here and giving them the chance to experience up close and personal what the Turks and Caicos has to offer makes all the difference in the world.”

As many as 85% of the visiting travel agents experienced the TCI for the first time with the Beaches Turks and Caicos team rolling out the ‘red carpet’ treatment with resort tours, island-wide excursions, catamaran tours as well as plenty of free time to explore the country all featuring in the agents’ exciting three day itinerary. In addition, each travel agent was required to attend a four-hour training course arming them with the education they need to successfully sell the destination once they reach home.

Jessica Lang from Travel Planners International in Florida commented, “It was a pleasure to experience Turks & Caicos for the very first time in the great care of Sandals. My stay at the Beaches Resort exceeded my expectations. It was a true treat for my soul to be surrounded by so much beauty, appetizing cuisine, and fun filled activities. Working for a large host agency, I love helping our travel agents sell not only more travel, but quality travel, and the Beaches Resort at Turks & Caicos is guaranteed to surpass the expectations, as it did for me.”

Stewart also paid tribute to the Turks and Caicos Government who contributed US$500k to the programme under a previous agreement, “the Travel Agent Megafams are not just about our resort, it’s about the Turks and Caicos Islands as a destination and I publically applaud the TCI Government for their role in ensuring the programme was both feasible and memorable. The majority of those agents who attended had never been to the TCI before so it’s easy to see the impact that this has had in the North American agent community.”

The island’s taxi drivers played an instrumental part in what is usually a slow period on the TCI tourism calendar and did a remarkable job transferring the groups to and from the airport and, in some case, providing island-wide orientation trips for the agents.

“I have received a multitude of the most tremendous messages and letters from agents commenting on everything from the food they ate and the service of resort staff right through to the taxi drivers and the immigration department, who did a marvellous job of fast tracking them through the airport. The word of mouth being generating is simply priceless and I take my hat off to His Excellency Governor Beckingham, Premier Ewing and his team, the opposition leader Sharlene Cartwright-Robinson, the great local hoteliers, the people of the TCI and everyone else who played a part in the programme’s success. Special mention must also go to Beaches Managing Director Don Dagenais and his resort team who blew them away; we are already reaping the benefits of the programme and plan to do more in the future,” Stewart concluded.