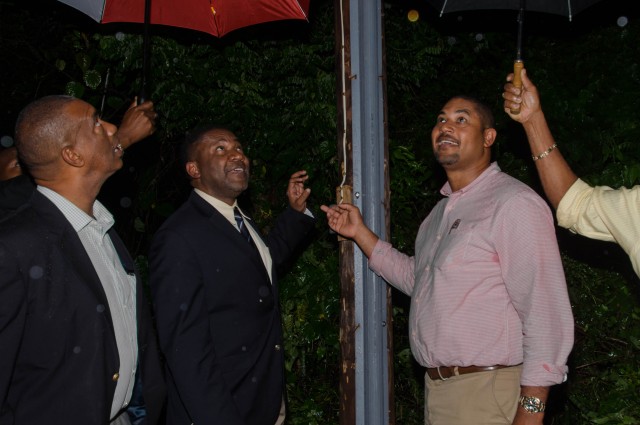 KINGSTON, Dec. 16 (JIS): Most of the three per cent of rural households that are without electricity will be provided with the service under a $74 million expansion project that the Government has initiated through the Petroleum Corporation of Jamaica (PCJ).

The project will be implemented by the Rural Electrification Programme (REP).

“The PCJ has allocated $74 million to the REP project, and we are going to take light across to all communities,” said Minister of Science, Technology, Energy and Mining, Hon. Phillip Paulwell. “We are going to do it in every single parish,” he added.

The Minister was addressing a brief ceremony held on Monday (December 15) at the Hyde Park United Church in Brooklyn, Manchester, before switching on lights to serve three communities in the parish. The areas are Mike Town, Evergreen and Brooklyn.

Some 70 households in the three communities are now receiving electricity under the project. It was implemented by REP at a cost of $14.5 million, with $3 million coming from the Constituency Development Fund (CDF), through Member of Parliament for North West Manchester, Mikael Phillips.

Mr. Phillips, who also addressed the commissioning ceremony, said that with the electricity, residents can now embark on projects to develop the community.
He urged them to pay for the energy that they consume.

Come next week, lights will be turned on in sections of the Llandilo community of Central Westmoreland.
The REP aims to extend electricity to rural Jamaica as part of the Government of Jamaica’s commitment to provide the entire island with access to the service to stimulate economic and social activity, and improve the quality of life of citizens.