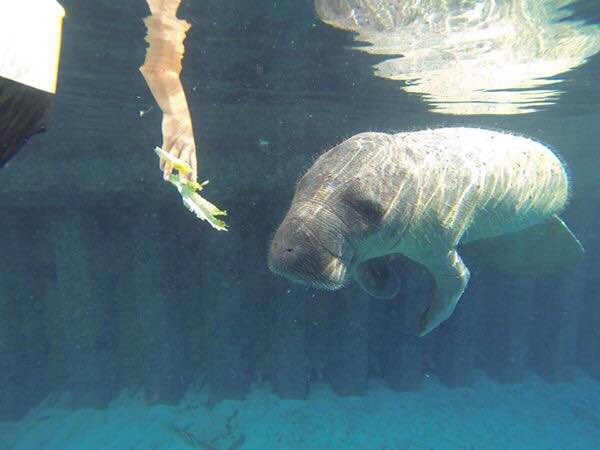 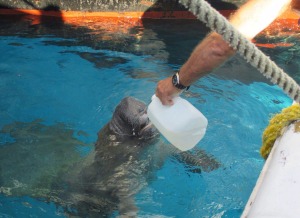 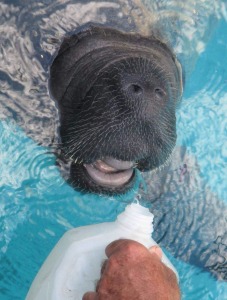 Grand Turk, 13 Nov 2014 (TCIG Press Release) – On Wednesday, 5 November, the Department of Environment and Maritime Affairs (DEMA) received a call from a concerned resident stating that there was a manatee seen swimming around the Ports Authority Dock in Grand Turk. Although it was not spotted on Thursday, on Friday, the Cruise Centre reported to DEMA’s Environmental Officer, Katharine Hart, that the manatee was seen near the cruise ships.

Manatees are not common in our waters and it is likely that the recent stormy weather in the region resulted in the juvenile straying from familiar waters and finding itself at Grand Turk. Manatees require fresh water, which unfortunately the TCI has very little of. This juvenile manatee was found to be severely dehydrated and emaciated, and attempts to rejuvenate the young animal were made by giving it fresh water to drink as well as lettuce. Since Friday, the manatee has consumed 30 gallons of fresh water.

Efforts are under way to rescue this six foot long, juvenilemale manatee. DEMA contacted both the US Fish and Wildlife Services, and the Puerto Rico Manatee Conservation Centre. Following a formal request for assistance, the Puerto Rico Manatee Conservation Centre offered both support and services to collect the animal and fly him back to Puerto Ricowhere he will be rehabilitated for eventual release into the wild. Once he has reached a healthy condition, the Centre will be able to investigate his genetics to determine which population of manatees he is from, and he can be released, with a satellite transmitter, into familiar waters.

Arrangements are being made to airlift the manatee to the Rehabilitation Centre as soon as possible; however, the TCI is responsible for funding his flight back to Puerto Rico. The cost will be approximately $2,000, and the Turks & Caicos Reef Fund (TCRF) is assisting with the raising of these funds. Donations can be made via PayPal on the TCRF website (http://tcreef.org/donate.html ). Any excess funds raised will go the Rehabilitation Centre to support the young manatee’s rehabilitation.