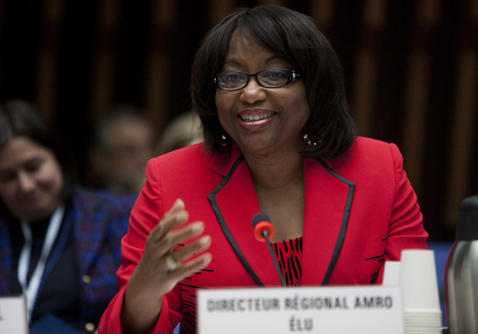 KINGSTON, Nov. 4 (JIS): The Pan American Health Organization/World Health Organization (PAHO/WHO) says it is committed to bolstering the required skills of all countries in the region to respond to, and contain a possible introductory case of Ebola in Latin America and the Caribbean.

Director of PAHO, Dr. Carissa Etienne, gave the commitment today (November 4), while addressing delegates from some 30 countries across the region, including Jamaica, at the opening of an Emergency Risk Communication Training Workshop in Barbados.

Dr. Etienne said PAHO/WHO is willing to send in-country missions to assess possible imported cases of Ebola into the region, if the need arises.

The three-day workshop is organised by PAHO/WHO, and is focused on current and potential risks to health, including influenza-like illnesses, chikungunya, dengue haemorrhagic fever, and Ebola.

The Director, who noted that Ebola is probably not merely a threat, but rather a possibility, said the communication workshop is an important aspect of the region’s preparedness.

“Ebola is not a new disease, although it is for the Americas. It remains a very scary one and that’s why this workshop is especially important,” she said.

Dr. Etienne pointed out that throughout the three-day workshop, participants will focus on preparedness as well as risk communication and the need to deliver clear, concise, and consistent messages to the public, to health care workers, and the media.

“The key principles of risk communication are trust and transparency. The goal is that our concerned public heed our request, whether that is to take their temperature or to follow a prescribed protocol,” she advised.
Members of the Jamaican delegation include: National Epidemiologist, Dr. Karen Webster; Behaviour Change Communications Officer, Ministry of Health, Sharon Jones; Public Relations Officer, South Eastern Regional Health Authority, Taneisha Lewis; Advisor – Disease Prevention and Control at PAHO/WHO for Jamaica, Bermuda and Cayman Islands and Chief Executive Officer of the Jamaica Information Service (JIS), Donna-Marie Rowe.

The opening of the workshop coincides with the 17th Special Meeting of the Conference of Heads of Government of CARICOM in Trinidad and Tobago.

The meeting will discuss the threat of Ebola as well as the Caribbean’s response to the Chikungunya Virus.

Jamaica is represented at the meeting by High Commissioner to Trinidad and Tobago, Sharon Saunders.