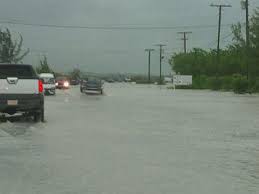 Providenciales, 09 Oct 2014 – Provo may never experience the flooding as had been seen in the deluge of TS Cristobal again. We have learned that Government has spent $162 thousand dollars on wells & drains and new wells & drains in the aftermath of that retreating rainy system which grid locked the nation for over a week. Seventeen drains have been re-drilled, while 14 new drainage wells have been dug – all on the island of Providenciales.

New wells will mean more run off points for any prolonged rains, the flooding so severe that it trapped people and created health risks. The Ministry of Health on Tuesday confirmed that those flood waters and the fact that they became mosquito breeding grounds did cause the cases of Dengue Fever and Chikungunya to surge dramatically for Turks and Caicos. The figures so high and changing so rapidly, especially in the case of Dengue Fever, that officials explained they are still collating numbers… and never gave new numbers for Dengue which is linked to one death in Grand Turk.