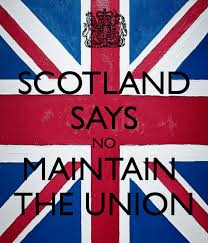 SCOTLAND votes no to independence. Although 1.6 million wanted it, that was not good enough as Scotland will remain a part of the United Kingdom. The BBC put it this way, by 55% to 45%, a majority of voters rejected the possibility of Scotland breaking away and becoming an independent nation. Voter turnout in Scotland was high; registration at 97%.