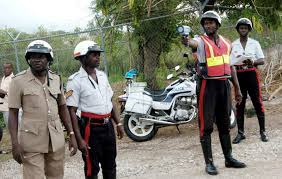 Members of the Traffic Department and the Grace Bay Station were yesterday busy in the rain conducting stop searches in sections of Providenciales.

Police sources have explained that the move is an ongoing operation by the department to try to curtail the number of traffic offences on the roads.

35 tickets were issued and 24 motorists warned of intended prosecution. Sources added that 1 arrest was made and a number of motorists completely abandoned their vehicles along the roadways; likely due to some breech of law.