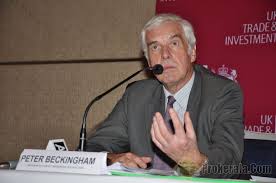 Preparations are in full swing for the arrival of the incoming governor of The Turks and Caicos Islands, Peter Beckingam; though he is entering as there is a volatile row ongoing involving his office…

The governor designate lands tomorrow October 8 and will be met by the Royal Turks and Caicos Islands Police Force and representatives from the governor’s office.

Beckingham will be sworn into office on Wednesday October 9th at the House of Assembly in Grand Turk, following which a news conference will be held at the Waterloo Residence.