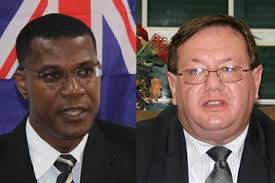 By now, it is widely known that Huw Shepherd has resigned and plans to sue the Turks and Caicos.

But there is still no firm reason being given as to why the Attorney General is quitting and both sides politically say they need more information to comment in greater detail.

It is no secret that both parties have been at loggerheads with Mr Huw Shepheard on some issue or another, but none of these publically expressed concerns had deterred the AG from accepting his reappointment in August from former governor Ric Todd.

Visiting FCO director was also tight lipped about the matter, telling media minutes after the notice was issued that indeed the AG has resigned and that he cannot comment as it is a legal matter.