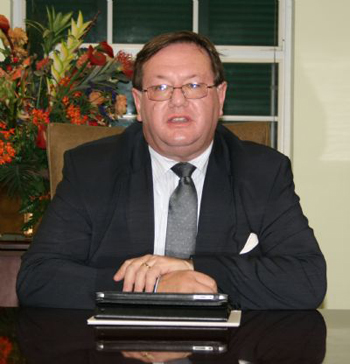 TURKS AND CAICOS ISLANDS, OCTOBER 4, 2013 It was business as usual for the Attorney General Huw Shepheard as he participated in his first cabinet meeting since returning to the islands a few days ago. In line with the Governor’s previous correspondence to the Premier and also at the Premier’s request the Attorney General Huw Shepheard was placed in the ‘hot seat’ as the government was given the opportunity to ask the AG burning questions.

Shepheard was hit with questions including his role in the SIPT, Civil Recovery and Crown Land invesgations. The government however, reportedly ended the day frustrated and dissatisfied with what they described as inadequate responses from the Attorney General and reaffirmed that they have lost all confidence in the AG.