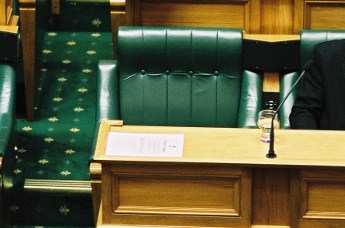 TURKS AND CAICOS ISLANDS, OCTOBER 8, 2013- The seat of the Attorney General cold all day yesterday as the AG was not present in the 10th sitting of the House. The meeting was postponed from Thursday to yesterday due to an ongoing discord between the government and Huw Shepherd, and despite knowing he was to be on the receiving end of questions, the AG was absent… reports to us are that it was a shocking slight, as even the Speaker of the House was not informed of the no show. The AG however, explained that he was absent because as Acting Governor he was not allowed to sit in the House of Assembly. Ric Todd is gone, the new governor not due in until Wednesday and the Acting Governor Anya Williams is out of country in London. Shepheard has been serving as Acting Governor since October 4th and will continue to do so until October 9th when the new governor, Peter Beckingham is sworn into office. Huw Shepheard added that there is no constitutional requirement for the Attorney General to be present at HOA meetings and there cannot be an acting AG as he has not left the islands. The AG in his response noted that he had dispatched Mrs Desiree Downes from Chambers to the House of Assembly to be on hand to provide advice which, in line with the Constitution must be provided to the House through a Minister.