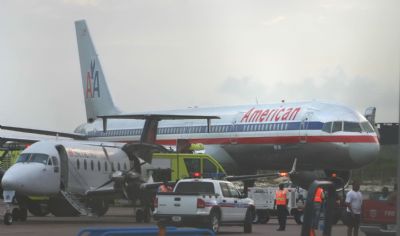 PROVIDENCIALES, TURKS AND CAICOS ISLANDS, OCTOBER 23, 2013- The Department of Disaster Management and Emergencies has reported that they received a 911 call a little after 10am yesterday informing that an American Airlines Boeing 757 from Trinidad heading to Miami had requested clearance for an Emergency landing at the Providenciales International Airport. With some 175 passengers including crew members aboard the flight the emergency landed became necessary as the pilot reported a fire in the cockpit and that the left engine was smoking and dripping fuel. The aircraft landed at 10:23am and was towed from the original spot on the runway to the main terminal. There were no injuries or fatalities.