Also in attendance was the Minister of State for the Environment, the Honourable Basil Mcintosh, who were all welcomed by Captain Glenn McPhee, Captain SOUTHERN COMMAND. The delegation was given a tour of the various holding facilities, and the RBDF vessels, HMBS Lawrence Major and HMBS Rolly Gray, which were alongside Matthew Town.

During the repatriation exercise on Friday 1, October a total of five hundred and sixteen (516) migrants were repatriated to Cape-Haitian, Haiti.

The HMBS Matthew Town Deployment Team is currently led by Sub Lieutenant Darius Adam, Base First Lieutenant SOUTHERN COMMAND, who is assisted by Chief Petty Officer Salathiel Simmons. The mission of the SOUTHERN 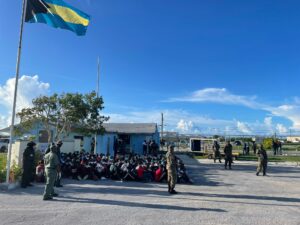 COMMAND is “To ensure continuity of administration, operations, and logistical support for all RBDF missions originating, transiting through or around the Southern Bahamas”.

The Royal Bahamas Defence Force has maintained a vigilant watch with patrol vessels that have been deployed to the southeast Bahamas to strengthen the Force’s posture against the migrant surge. The organization remains committed to collaborating with local and international partner agencies while protecting the territorial integrity of The Bahamas and keeping our borders secured.

Header: RBDF Captain Glenn McPhee, Captain SOUTHERN COMMAND, and the Officers and Marines, leading a tour of the government ministers during a recent visit to Matthew Town, Inagua.

1st insert: RBDF Captain Glenn McPhee, Captain SOUTHERN COMMAND, and the Officers and Marines, leading a tour of the government ministers during a recent visit to Matthew Town, Inagua.