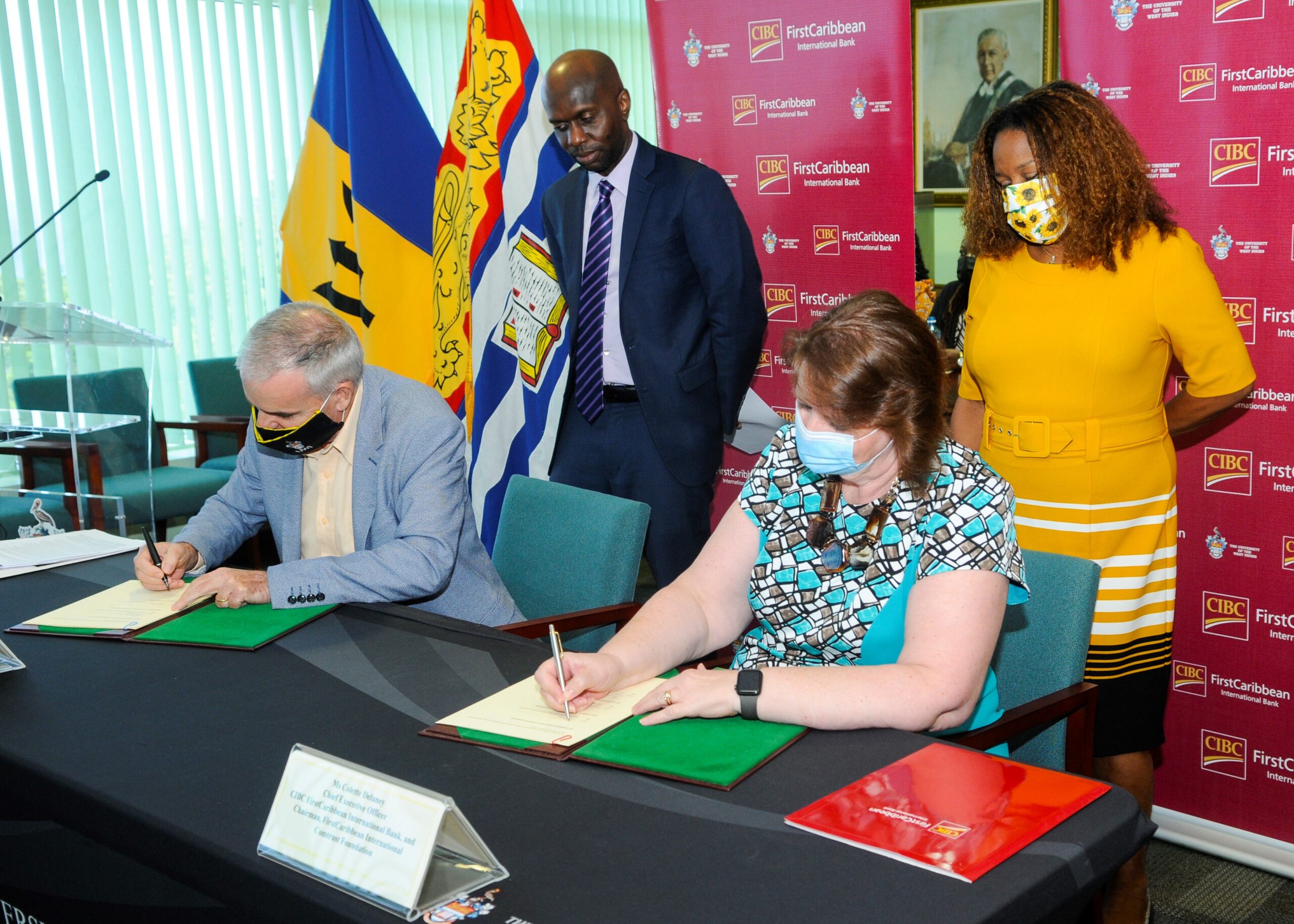 #Barbados, September 9, 2021 – CIBC FirstCaribbean has officially extended its partnership with The University of the West Indies, Cave Hill Campus with the signing of a memorandum of understanding for three years.

The agreement, which was signed on Tuesday August 17, 2021, is for the period 2021/22 to 2023/24, and will cover four areas: support and development of UWI programmes and students around the region; enhancement of research in Banking and Finance at The UWI; the joint pursuit of mutually beneficial business opportunities, and entrepreneurship and innovation.

The bank has contributed over US$2 million to The UWI to support various initiatives since the first MOU was signed between the two institutions in 2003.

Chief Executive Officer of CIBC FirstCaribbean, Colette Delaney stated that the bank cherishes its longstanding relationship with The UWI, and was pleased to formally extend it for another three years.

She added that entrepreneurship and innovation will be the key drivers of the post-COVID economy, and The UWI is headed in the right direction.

“We see the scholarships, research grants, public lectures and other programmes and activities offered under this MOU as tangible demonstrations of our commitment to this region and its development.

“Investment in and support of our region’s people especially the youth remains one of the key pillars of our charitable arm the FirstCaribbean ComTrust Foundation of which I have the honour to chair and which is providing the funding for the programmes and projects in this MOU,” Delaney said

Principal of the Cave Hill Campus, Professor Clive Landis, lauded the bank’s support for the University over the past 18 years, and said he is looking forward to the two institutions forging even closer ties.

“As a result of the bank’s generosity, several of our students who were experiencing financial challenges have been able to realise their dream of attaining a university education.  Many of these have gone on to make a meaningful contribution in this region and further afield.

“It is clear then, in the current public health climate, that such assistance is needed now more than ever, as so many across the Caribbean and the world have suffered severe financial losses as a result of the pandemic,” he said. 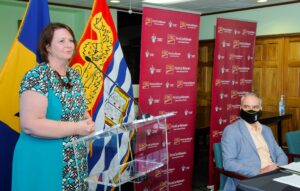 Landis noted that The UWI would need to innovate and seek new business perspectives if the institution is to survive.  In that regard, he announced the launch of the Campus’ latest entrepreneurial initiative, the Innovate! Challenge, which is a competition organised by the Office of Business Development that rewards staff for impactful and innovative ideas that lead to income generation for their unit or department, as well as the campus.

The competition will be launched later this year and will be sponsored by CIBC FirstCaribbean.

One of the major beneficiaries of the MOU is the Student Entrepreneurial Empowerment Development (SEED) project, which is designed to encourage and develop self-reliance.

The bank has assisted with providing access to finance and a business plan competition. To date, $240,000 has been disbursed among 40 start-ups since the inception of the programme.

Header: The first donation to the Department of Gender Affairs, made by CIBC FirstCaribbean on International Women’s Day, was the springboard for the Department’s food and gift-bag distribution programme. The programme focused on alleviating the economic strain and burden of poverty for single female-headed families and young women in particular.

Insert: Over the last month, CIBC FirstCaribbean’s Human Resources Department, headed by Mrs. Dillon-O’Neil, encouraged persons to donate non-perishable items.  Boxes were placed at each of the bank’s branches for contributions by staff. 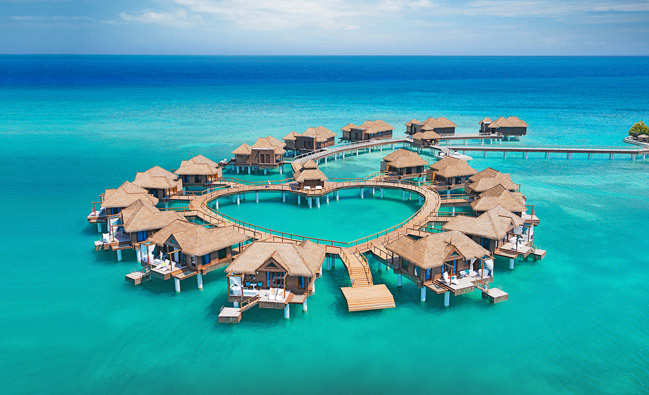