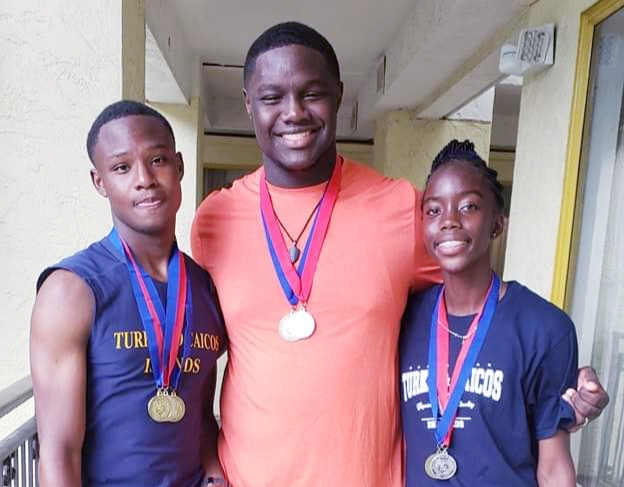 #TurksandCaicos, July 8, 2021 – A Team from the Turks and Caicos Amateur Athletic Association (TCAAA) will be traveling to San Jose, Costa Rica to represent the Turks and Caicos Islands at the NACAC U18/U23 Championships, which will take place July 9th  to 11th 2021. The Team is made up of three athletes and two Officials, who will leave Providenciales on Wednesday July 7th and return on Monday July 12th.  The members of the team are as follows:

It should be noted here that two (2) others Athletes studying in Jamaica, Tayjoe Oppong and Darvioun Rigby also qualified to make the Team, but because of them having to sit CXC Examination at this time, they are not able to attend.

The Turks and Caicos Island will be represented in seven events:

On Friday, July 9 at 8:00 am Antwon Walkin goes first into Competition in the Under 18 Boys Discus Finals.

Tanesia Gardiner goes into action next in the Girls 3000m open at 10.25am.

On Saturday, July 10 at 9:30 am will see Rayvon Walkin competing in theLong Jump Under 18 Boys Final, and at 3:00 pm he will compete in the High Jump under 18 Boys.  Rayvon’s third event will also take place that same day at 5:55 pm, when he participates in the 200m Semi-final.

After reviewing the heat sheets on Thursday night’s technical meeting, Coach Ford will decide with Rayvon’s input if they should drop the High Jump which is his weakest event.

On Sunday, July 11 the only female on the team, Tanesia Gardiner will compete in the under 18 Girls High Jump at 11:30am.

All three athletes are injury free and in a good spirit, having recently concluded their school end of year examinations.  It must be noted here that all three athletes participated in the 45th Annual Northwest Track & Field Classic in Pompano Beach, Fl last month, and were successful in obtaining gold and silver medals in their respective events.

The members and officers of TCAAA wish Team TCI safe travelling mercies and all the best in their events.

TCI: “Race for the Conch” Back With 101 Swimmers

TCI: Sonia Fulford Re-Elected To The FIFA Council For Another 4-Year Term