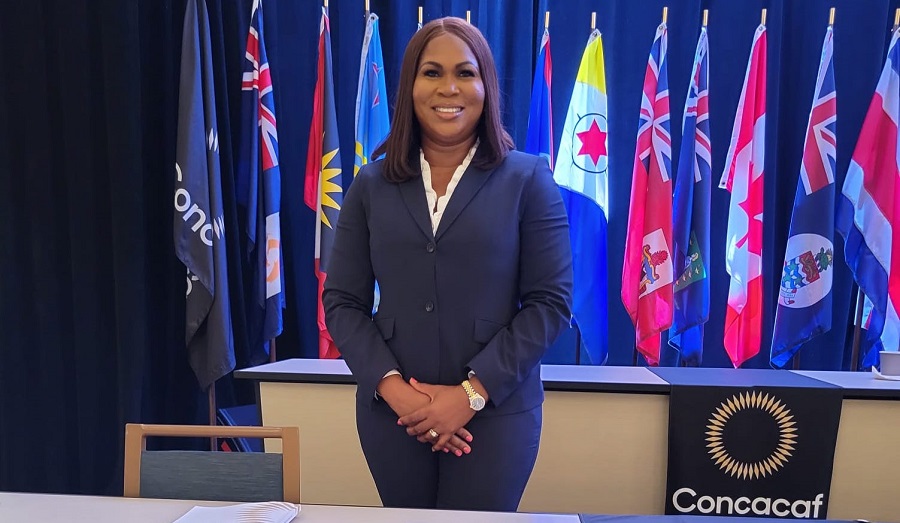 #Turksandcaicos, July 8, 2021 – Turks and Caicos Islands Football Association (TCIFA) President, Sonia Fulford, has been re-elected to serve another four-year term on the FIFA Council. On Wednesday, 7 July 2021, Sonia ran unopposed at the 35th Concacaf Ordinary Congress, which was held at JW Turnberry in Miami, Florida.

Concacaf is the Confederation of North, Central America and Caribbean Association Football, one of FIFA’s six continental confederations, servicing 41 Member Associations from Canada in the north, to Guyana, Suriname and French Guiana in the south; and including the Turks and Caicos Islands.

Sonia was first welcomed into the Concacaf Council on November 2013, in a co-opted position, then became the first female to be elected to the Council at its 30th Ordinary Congress on April 2015. Later on, in 2015, she was awarded the opportunity by appointment of the Concacaf Council, voting rights (that was not initially designated for a female) within the highest ranks of football governing- the FIFA Council, where she served in a co-opted position since May 2013.

Sonia’s journey as FIFA Council member met her with a challenge for the position at the 31st Concacaf Congress in May 2016. She was elected first Female Member representative on the FIFA Council with a resounding 27-8 victory against her contender, Joanne Salazar of Trinidad and Tobago.

Here marks another milestone, as Sonia continues to gain ground in the generally male dominated sport with grace and conviction, and press forward in serving a second full term on the FIFA Council. Sonia emphasizes through her accomplishments that gender is not a limiting factor. She maintains a personal goal of reaching her own potential and influencing other girls and women through dedication and service. “It is an exciting and very rewarding feeling to, yet again, receive an overwhelming vote of confidence to continue to serve all those in football, not only to be a voice and advocate for gender equality, but for further development of football in general. I would like to thank the members for their trust in me to continue the work that I have already started and also to embark on new opportunities for growth and development of the sport within Concacaf and the wider world,” said Sonia.

First Lady of Haiti is Stable