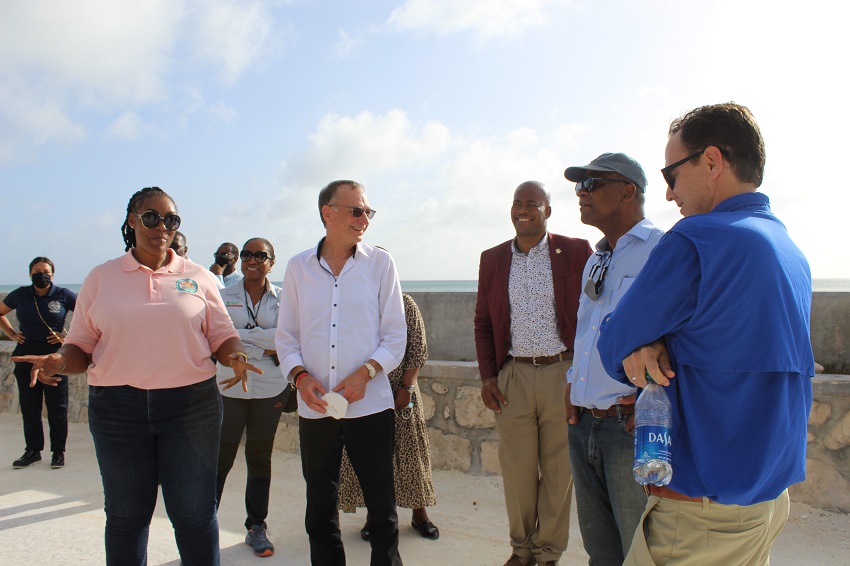 #TurksandCaicos, June 24, 2021 – The Premier was in his element, out of the suit and out of the office, donning a cap, shades, sneakers and jeans and with a command of the space, he led a walking tour of the capital where he was able to speak to the historic charm of Grand Turk and true potential of the country’s capital.

Washington Misick believes it just takes some dusting off, some elbow grease, dedicated focus and some money from the joint infrastructure fund and the TCI Government.

The Premier sees at least five more museums for Grand Turk.  He also hopes for a rejuvenation to Middle Street; an area where he took piano lessons as a boy and served as a member of the Royal Turks and Caicos Islands police in his younger days.

In an interview following the public meeting held at the Parade Grounds on June 17, the premier agreed that capital for new activities will be key.  He was asked if the government was prepared to jump start SMEs.

“The government is working on a Development Finance Corporation to increase the amount of funding that would be available to start ups and small businesses.  The amount of money that is currently in the SME,  available for grants, in the interim, we will look at how that can be increased but also, at this juncture it is important to start to position that for issues such as the one that we are facing now because these people are going to need assistance in tooling up for the re-opening,” said the Premier and Finance Minister, referring to the Grand Turk businesses sunk by the impact of the pandemic on cruise tourism.

No cruise ship has called on Grand Turk since March 3, 2020.

Following the tour, Mr. Giora Israel of Carnival Corp who was on board since the inception of the GT Cruise Center had glowing remarks for the chief, who has been at the helm for just over four months now.

“We’ve just ended a walk through Middle Street.  I have done this times before, but Premier Misick was amazing.  We needed somebody with passion and we are so excited at the determination of the Premier and the other ministers with us here today.  To bring this to the heart of Grand Turk; this has a spirt, this has a soul.  So let’s hope this will soon happen for the island.  It is so special, there is no other place like this in the Caribbean.”